Rhinos to be Extinct by 2020: Experts 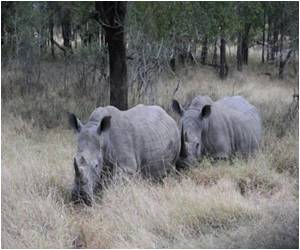 If poaching continues at the present alarming rate, both white and black rhinos will be extinct by the year 2020, reveal experts.

Will Travers, chief executive of the Born Free Foundation, said that there are just 20,000 white rhino and 5,000 black rhino left in the wild and the poaching would devastate the numbers in the next six years, the Daily Express reported.

Vietnamese cancer people frantic for cure seek ground rhinoceros horn which is seen as an elixir of life, a medically unproven and illegal craze that endangers the survival of the world's wild rhinos.
Advertisement

He said that there will probably be no free-living rhinos as the remaining numbers will be fenced off in military-style compounds which are alarmed and heavily guarded by armed patrols.

A zoo in Bhubaneshwar today celebrated the 'Elephant Day', to spread awareness about the pachyderms.

Women Like to 'Poach' Men Who are Already in Relationships