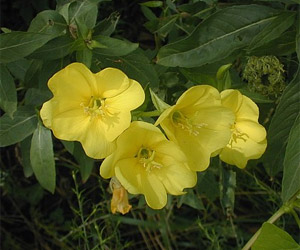 Atopic eczema, also known as atopic dermatitis, is an itchy skin condition with no known cure. Usually emerging in childhood, it affects about 10 to 20% of school age children, who may suffer with tight, red, painful skin, sleepless nights and low self-esteem due to appearance, itching and scratching. For around 60% of people, the disorder will improve or clear up by adulthood. Creams, ointments, bath additives, topical steroids and antihistamines are some of the treatments prescribed to ease the condition. However, people often turn to complementary therapies such as evening primrose oil and borage oil in the belief that they will avoid side effects of conventional eczema treatments. Both evening primrose oil and borage oil contain high quantities of gamma linoleic acid, which was once thought to play a role in reducing skin inflammation in eczema.

Evening Primrose Oil (EPO) is derived from the seeds of the evening primrose plant (Oenthera biennis). It is native to North America. The irony is that there it is regarded as a weed.
Advertisement

The researchers analysed the benefits and side effects associated with evening primrose oil and borage oil in 27 studies involving a total of 1,596 people (adults and children) in 27 countries. Participants took evening primrose oil or borage oil, or a placebo, for between 3-24 weeks. Overall, the researchers found that taking evening primrose or borage oil offered no clear improvement of eczema symptoms over placebos. Commonly used placebos included olive oil and paraffin oil. There was also no improvement in quality of life with the complementary therapies, although only two studies considered this measure.


"There is no evidence that taking either evening primrose or borage oil is of benefit to eczema sufferers," said lead researcher Joel Bamford of the University of Minnesota Medical School and Essentia Health System in Duluth, Minnesota, US. "Given the strength of the evidence in our review, we think further studies on the use of these complementary therapies to treat eczema would be hard to justify."

Atopic dermatitis is an inflammatory, non-contagious, chronic skin disorder that involves scaly and itchy rashes. It is also called eczema, dermatitis or atopy.
Advertisement
Some participants in the studies experienced mild side effects such as headaches and stomach upsets or diarrhoea as they also did while taking placebos. However, none of the selected studies evaluated or mentioned bleeding or anti-clotting effects, which have previously been associated with evening primrose oil. "Consumers need to be warned that oral evening primrose oil is listed as a known cause of increased bleeding for those taking Coumadin or warfarin, a very common medication," said Bamford.

Rashes are of varied types, color and texture. What causes a rash and what are its consequences? Learn more from this quiz on rashes.
Advertisement
<< Key Mechanism for a Common Form of Alzheimer's Disease Disc...
Study Says Young Obesity Doubles Death Risk Before 55 >>