Many gay couples from the US are opting to get children by signing up surrogate mothers in India.

For gay US businessman Brad Fister, experiencing the joy of fatherhood meant flying half way around the world to India where he first held his baby daughter, born to a woman who had signed away any right to her child. 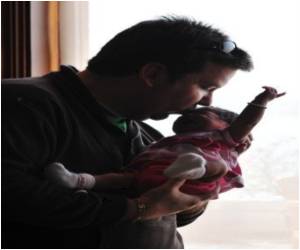 Fister experiences the joy of fatherhood 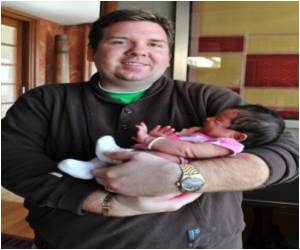 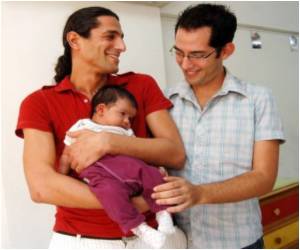 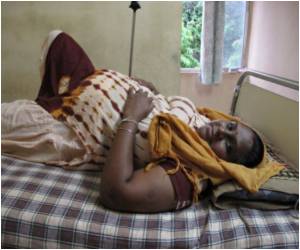 Commercial surrogacy is a booming industry in India, and in recent years the ranks of childless foreign couples have been swelled by gay partners looking for a low-cost, legally-friendly path to parenthood.


In the United States, laws governing adoption and surrogacy vary from state to state, while in India the service is legal, loosely regulated and -- so far at least -- non-discriminatory on grounds of sexual orientation.

For Fister and his partner Michael Griebe, a crucial attraction is that surrogate mothers in India are generally willing to renounce any legal claim to the child.

"We decided to have a baby a year and a half ago but the problem in the United States is mothers often do not relinquish the rights to the child," Fister told AFP before leaving the southern city of Hyderabad with his baby daughter last month.

"It was all so simple here and if we decide to have another we would return," he said.

A DNA match had secured a US passport for the child, who was born with Fister's sperm using in vitro fertilization (IVF).

Fister and Griebe used a Chicago-based agency, Surrogacy Abroad, which specialises in finding surrogate mothers in India and has a growing number of gay couples on its client roster.

Benhur Samson, who runs the agency, said he was currently processing a dozen couples, "including several gay partners."

"I will be in India very soon with two or three parties, including a gay couple from Britain and a Hong Kong-based British single woman," Samson told AFP by telephone.

Surrogacy Abroad bills each couple around 20,000 dollars, including medical charges and the payment for the surrogate who receives around 8,000 dollars.

An initial miscarriage meant Fister and Griebe spent 40,000 dollars, but that is still far cheaper than in the United States, where multiple attempts can leave couples with bills of more than 100,000 dollars.

India IVF clinics claim a high success rate as doctors are allowed to implant five embryos into the uterus at one time. In many other countries, such as Britain, only two implants are allowed.

According to the Indian Surrogacy Law Centre, a legal firm based in the southern Indian city of Chennai, opportunities for gay couples to find surrogate mothers overseas have grown substantially.

"South Africa is now advertising access to such surrogacy, but India has the highest volume because procedures here are simple and more affordable than other countries," said G.R. Hari, a partner in the legal firm.

"Proven success in surrogacy is inspiring more and more to come to India, where institutions like us help them to overcome legal hurdles they often face back home," Hari said.

Despite rapid economic and social change it remains a largely conservative country and only decriminalised consensual sex between homosexuals last year.

Traditional taboos mean that the openly gay community remains small relative to the size of the population.

"Where will all this end? Surrogate farming in poorer countries has implications of human trafficking," said John Dayal, secretary general of the All India Christian Council.

The council is particularly concerned that foreign gay couples figure increasingly on the client lists of Indian IVF clinics.

"The church is clear that marriage and parenthood are sacraments and they are valid only for those in natural union which is husband and wife," Dayal said.

"Same sex couples quite obviously do not fall into this category and would not be able to provide the child the normal social and moral family environment that every child requires," he told AFP.

The first foreign gay partners to acquire a baby through surrogacy in India -- in May 2008 -- were Israelis who used the Rotunda Fertility Clinic in Mumbai, which has been at the forefront of what some call the "pregnancy outsourcing" trend in India.

Gautam Allahbadia, who runs the clinic, says he has since handled pregnancies for 60 overseas gay couples.

Ectopic Pregnancy
When the fertilization of the ovum occurs in a place other than the uterus, the condition is called ectopic pregnancy. This is a life threatening condition, ectopic pregnancy surgery can help.
READ MORE