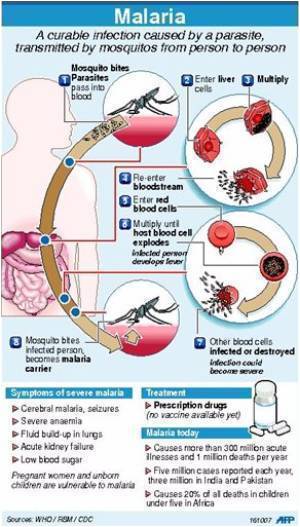 New developments which will provide an affordable, reliable, and stable treatment for malaria that will save millions of lives, especially those of women and children in Africa have been adopted by Canada.

The Honourable Gary Goodyear, Minister of State for Science and Technology, along with Mr. Brad Trost, Member of Parliament for Saskatoon-Humboldt, announced the breakthrough today and highlighted the Government's research support.

"Our government is committed to improving the health of women and children in developing countries," said Minister Goodyear. "This new development in the production of a malaria treatment represents a major development in the fight against the disease. It will strengthen Canada's position as a world leader in health research and provide a reliable and affordable solution."


Today's announcement is a result of The Artemisinin Project, a public-private partnership led by OneWorld Health in collaboration with sanofi-aventis, Amyris, the University of California at Berkeley, and the National Research Council of Canada. Artemisinin is a natural compound found in a traditional Chinese medicinal plant grown mainly in Africa and Asia to treat malaria. The Government of Canada's investment of approximately $869,000 in this research has led to technology that can produce a stable and affordable supply of artemisinin for the developing world on a not-for-profit basis.

Mosquito-borne diseases, like malaria, filaria, dengue, etc are common in places conducive of mosquito breeding. Swamps, ponds and stagnated drainage provide optimal breeding ground for mosquitoes.
Advertisement
"Collaboration on the development of this new technology promises to have a major impact on supply of malaria treatment across the developing world, which will be an important contribution towards the global effort to combat malaria," said Dr. Richard Chin, Chief Executive Officer of OneWorld Health.

According to the World Health Organization, malaria causes approximately 250 million illnesses and more than one million deaths each year, of which 90 percent occur in Africa, mostly in pregnant women and in children. The disease is endemic in nearly 100 countries, including 28 on the African continent. This project is expected to help treat 200 million cases and prevent over one million deaths annually.

Greenhouse effect causes excessive heat to build up in the earth's atmosphere causing global warming and affects the environment and health.
Advertisement
<< Parents' Willingness to Enroll Their Children in Research I...
Research Says Pollen also Appears Outside Flowering Season >>

Blood Donation - Recipients Find a Hospital A-Z Drug Brands in India Indian Medical Journals Drug - Food Interactions Loram (2 mg) (Lorazepam) Selfie Addiction Calculator How to Reduce School Bag Weight - Simple Tips Color Blindness Calculator The Essence of Yoga
This site uses cookies to deliver our services. By using our site, you acknowledge that you have read and understand our Cookie Policy, Privacy Policy, and our Terms of Use