Restoring Gender Balance in India With Songs And Shame 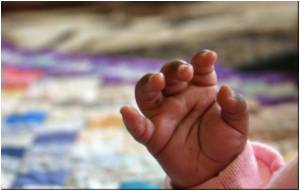 Maternity ward in Nawanshahr district public hospital tenders a spectacle in India where parents coo over oodles of newborn girls.

In 2004, Nawanshahr in the northern state of Punjab was notorious for its abysmal sex ratio, recording just 795 female births for every 1,000 male births annually.

The last eight years have witnessed a radical turnaround with Nawanshahr recording 949 female births for every 1,000 male births in 2011, just shy of the naturally occurring rate of 952:1,000.


The striking success in restoring the gender balance has been built on a twin-pronged strategy of strict -- and, some critics argue, intrusive -- monitoring of pregnancies and a colourful, grassroots awareness-raising campaign.
Advertisement
As a first step in 2005, the district's top civil servant, Krishan Kumar, pushed a crackdown on pre-natal sex determination tests which are illegal in India but widely available given the prevalence of ultrasound technology.

In two years, nearly two-thirds of all ultrasound scan centres in Nawanshahr were shut down or forced to suspend operations for violating the law.

The cases are currently under trial.

Traditionally, married women in India have faced huge pressure to produce male heirs who are seen as breadwinners, family leaders and carers when parents age.

The development of cheap, mobile, ultrasound equipment -- now available in even remote villages -- saw this gender bias manifest itself in a surge in the abortion of female foetuses, or "female foeticide."

Alarming census figures released last year showed new-born girls had never been so outnumbered by boys in India since independence in 1947.

Health workers go door-to-door recording new pregnancies and return around the scheduled date of delivery to check on the outcome.

If the family refuses to answer questions or says the woman miscarried, officials make enquiries locally to establish if the foetus was aborted because it was female.

Jaspal Singh Gidda, who heads the Upkar Coordination Society, a local NGO which works with the district administration, said the aim was to publicly shame couples who opt for abortions on gender grounds.

Twice, when officials uncovered evidence of sex-selective abortions, Gidda and other Upkar volunteers held a day-long ceremony outside the family's home to mourn the lost foetus.

"We help generate community pressure against female foeticide by doing all this," Gidda said.

Nawanshahr's success has brought it national attention, but some activists are unsure that the means justify the end.

"The administration has good intentions but their tactics are totally unethical, totally wrong," George told AFP.

"They have heaped tremendous pressure on women, who already face terrible pressure from their families," he said.

But doctors like Usha Kiran, who works in the maternity ward of the district hospital, argue that firm intervention is the only way forward.

"Unless the government steps in people won't change. Otherwise those who wanted sons would have just continued to get scans done and practise sex selection," Kiran said, as she checked on her new mothers and infants.

"Earlier people used to come here and say, 'we want a son'.

"No one has come to me recently and said they want a son. These days I deliver as many female as male babies," she said.

Upkar's Gidda said the birth sex ratio in Nawanshahr had become so dramatically skewed by 2004, that urgent action yielding tangible short-term results had to be adopted.

"The destruction had already hit us by then -- it was like a flood, like a natural disaster. By the time we woke up, we had to make a real effort," he said.

At the same time, longer-term awareness-raising programmes have also been introduced to spread the anti-foeticide message at the grassroots level.

A recent Sunday morning saw around 50 Upkar volunteers descend on the small village of Jasso Majara, singing songs with lyrics such as: "Daughters are born to rule, not to be slaughtered" and "Don't murder unborn girls".

As the group walked past green sugarcane fields, with little boys and girls carrying banners against the aborting of female foetuses, sleepy villagers emerged in the dawn light to watch the procession pass by.

Some joined in, while others watched quietly, cleaning their teeth while sitting on the doorsteps of their homes.

In Kiran's maternity ward, there is substantial evidence that traditional mindsets are being changed, not just in terms of the growing numbers of girl infants but also in the obvious joy they bring.

"I am just thrilled... there is nothing sons can give you which daughters can't," said new grandmother Ranjit Kaur as she cradled her two-day-old granddaughter Gudiya.

Pooja Dheer, a 24-year-old graduate student expecting her first child in August said no one in her family was concerned over whether she will give birth to a boy or a girl.

"They are both equal. Girls can work, they can do anything," she said firmly.

"A woman should be given every right to have a daughter."

Source: AFP
Advertisement
<< Ecstasy Debate Continues To Go On
Unplanned Births in US is 37 Percent >>