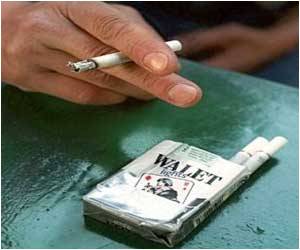 'Third-hand smoke' causes serious respiratory illness, according to researchers in Israel who studied the effect of cigarette smoke on different surfaces.

The invisible remains of cigarette smoke, that lingers on fabrics, carpets, furniture, and other surfaces show that the interaction between nicotine and indoor air has an effect that poses a serious health hazard. Secondary organic aerosol (SOA) is formed from the nicotine-oxidant reaction and this has a detrimental effect even on those who don't smoke actively.

This third-hand smoke threatens 'passive smokers', including crawling babies with potential pro-inflammatory effects and particle deposits in respiratory regions which can relocate easily anywhere in the body.


Further research is still needed on the subject.

Approximately half the smokers die due to smoking -related diseases. But it is not just the smokers who are at the receiving end. The passive smokers too, often pay a heavy price. If you still have not 'kicked the butt', learn more horrifying facts about smoking by participating in the following quiz.
Advertisement
<< US Trial of Cancer-Fighting Isotope to be Initiated by Arev...
Reminders About Immunization Schedule Through E-alerts >>

More News on:
Acute Bronchitis Smoking And Cancer Smoking And Tobacco Diet Lifestyle and Heart Disease Asbestosis Cigarette Smoking - A Silent Killer Antioxidants to Help You When You Quit Smoking

Sanatogen Turmeric Powder - Health Benefits, Uses & Side Effects Find a Doctor Blood Donation - Recipients Sinopril (2mg) (Lacidipine) Drug Interaction Checker Noscaphene (Noscapine) Blood Pressure Calculator Accident and Trauma Care Find a Hospital
This site uses cookies to deliver our services.By using our site, you acknowledge that you have read and understand our Cookie Policy, Privacy Policy, and our Terms of Use  Ok, Got it. Close
×