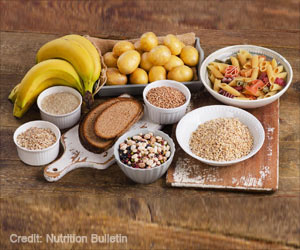 Foods that contain resistant starch may help keep blood sugar under control, enhance satiety as well as improve gut health, finds a new study. Some of the sources of resistant starch are bananas, potatoes, grains and legumes.

Resistant starch is a form of starch that is not digested in the small intestine and is therefore considered a type of dietary fiber.

Resistant starch foods can help you burn more calories and nullify the need for dieting
Advertisement
‘Resistant starch is a type of dietary fiber that does not get digested in the small intestine. It improves gut health by increasing the production of short-chain fatty acids.’
Tweet it Now

"We know that adequate fiber intake -- at least 30 grams per day -- is important for achieving a healthy, balanced diet, which reduces the risk of developing a range of chronic diseases," said Stacey Lockyer, Nutrition Scientist at British Nutrition Foundation, a Britain-based charity.


Apart from occurring naturally in foods, resistant starch is also produced or modified commercially and incorporated into food products.

Unlike the typical starch, resistant starch acts as a type of fiber in the body as it does not get digested in your small intestine, but is fermented in the large intestine.

Resistant starch type 4 known as RS4 is not broken down in the upper gastrointestinal tract, but fermented by the gut bacteria in the colon to benefit health.
Advertisement
This dietary fiber then increases the production of short-chain fatty acids in the gut, which acts as an energy source for the colonic cells, thus improving the gut health and increasing satiety.

According to the researchers, there is consistent evidence that consumption of resistant starch can aid blood sugar control. It has also been suggested that resistant starch can support gut health and enhance satiety via increased production of short chain fatty acids.

"Whilst findings support positive effects on some markers, further research is needed in most areas to establish whether consuming resistant starch can confer significant benefits that are relevant to the general population. However, this is definitely an exciting area of nutritional research for the future," Lockyer said.

The study was published in the journal Nutrition Bulletin.

Study Reveals Why We Crave for Sugary and Starchy Foods

A new study has found out why people crave for sugary or starchy foods, saying that brain senses how much glucose is reaching it and then prompts animals to seek more if it detects a shortfall.

The HbA1c assay is the gold-standard measurement of chronic glycemia and measures the amount of glucose that ...

Whole wheat flour is rapidly gaining exposure for its rich nutritional value and being considered healthy, as ...