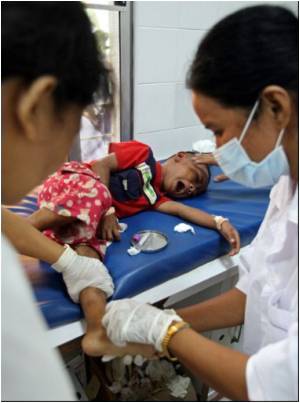 Resistance to a new anti-malarial medication is increasing, claims a US expert, as it spreads in areas around Western Cambodia where it was first identified.

The World Health Organization (WHO) warned early last year that parasites resistant to the drug artemisinin had emerged along the border between Cambodia and Thailand.

Artemisinin-based medication has been largely credited in recent years with increasing recovery rates from the mosquito-transmitted disease that kills nearly one million people a year worldwide.


Timothy Ziemer, the US government's global coordinator against malaria, said that after first being spotted in western Cambodia in 2007, "there are now indications of artemisinin resistance in other parts of the region".

Malaria Prevention Possible Even With Combination Therapies, Instead of Treated Bednets

A new study has found that artemisinin combination therapies could be almost as effective in reducing transmission of malaria as insecticide-treated bednets (ITNs) in areas of low transmission.
Advertisement
Signs of resistance to artemisinin had been found in southern Myanmar and possibly on the Chinese-Myanmar border, and in southern Vietnam near Cambodia, the retired rear admiral told a regional conference that ended Friday.

The WHO warned last year that emergence of the resistance could "seriously undermine" efforts to bring malaria under control.

Artemisinin-based medication was regarded as a replacement for older drugs that were fast becoming useless in several areas of the world as the malaria parasite developed resistance to them.

"But it is essential that national governments remain focused to contain and eventually eliminate these multi-drug resistant strains," he told the conference on international cooperation against infectious diseases.

Important to that strategy is the elimination of fake and substandard medicines, which increase resistance, he said in a speech Thursday.

During pregnancy & lactation a nutritious diet, suitable exercise, adequate rest and a tranquil mind help both the mother and fetus and drugs should be avoided.
Advertisement
<< Myanmar Pro-Democracy Leader Turns 65 Under House Arrest, W...
Bane of the Tourist: Hitting Back Against the Mosquito >>

Pregnancy Confirmation Calculator Blood Donation - Recipients Drug Side Effects Calculator Drug Interaction Checker Daily Calorie Requirements The Essence of Yoga Sanatogen A-Z Drug Brands in India Sinopril (2mg) (Lacidipine) Turmeric Powder - Health Benefits, Uses & Side Effects
This site uses cookies to deliver our services. By using our site, you acknowledge that you have read and understand our Cookie Policy, Privacy Policy, and our Terms of Use