Resident Lobby Cat of Algonquin Hotel on a Leash 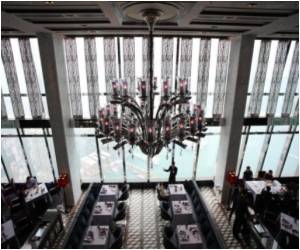 City health police have asked Algonquin hotel to put its resident lobby cat on a leash.

Matilda III is The Algonquin's most pampered guest but now has to suffer the indignity of being leashed until she understands that due to newly enforced city hygiene rules the lobby has been declared for human use only.

"She's leashed right now, but as she learns, which she is doing, she will be free," said Alice Dealmeida, a spokeswoman for the Manhattan hotel, famous for hosting a glamorous literary salon known as the Round Table in the 1920s.


The restrictions on Matilda's movements came under pressure from the Department of Health and Mental Hygiene, which grades eating establishments around the city and can ruin an outlet's reputation by awarding a dreaded "C."

Removing the cat from the seating area of the hotel's lobby area, where food is also served, was a preemptive measure while the hotel awaits what it hopes will be an "A."

The New York Post tabloid expressed "MEOW'TRAGE" over the lockdown and posters on Matilda's Facebook page concurred. "Hhow ruuuuude! Matilda is part of the Algonquin -- doesn't the city have anything better to do??!" howled one fan.

"Don't let them get under your fur, Matilda. You stay right where you are!" snarled another.

Dealmeida insists that the puss at the center of the attention is taking things easy.

"She's in the lobby smiling and posing. She's at the front desk," Dealmeida told AFP.

The spokeswoman said the cat was "in training not to go in areas where they serve food" and that once this was accomplished the leash would come off.

The Algonquin has always had a house cat since the 1930s. Matilda, the 10th to take up residence, gets regular email and has her own room with a cat door -- and room service of course.

Pet Kitten Turned into a Druggie by Doherty?
Pete Doherty 's pet kitten in fact has not been spared from his junkie habits. Dinger the adult cat of the distressed rocker recently had a litter
READ MORE

Take Care of New Born Pups With "pet-ernity" Leave
Lucky are those who have been working for Virgin Mobile, an Australian company, for two years. They will now be entitled to take "pet-ernity" leave to care for their newborn pups and kittens.
READ MORE