Demand for Reservation In Jobs, Educational Institutions For Thalassemic Patients in India 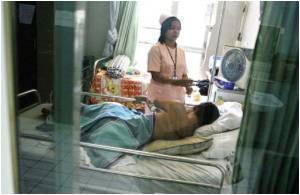 A public welfare trust has urged the Himachal Pradesh government to reserve certain number of seats in educational institutions and government jobs for thalassemic patients.

According to Umang Foundation, a local public welfare trust, the government should cover the genetic blood disorder disease under the definition of disability and start its screening facility soon.

Willingness to 'Learning' Likelier to Get 'Dream Jobs'

People who have an attitude to learn will have more success finding their dream jobs than their counterparts, reveals a new study.
Advertisement

In a letter to Chief Minister Virbhadra Singh, Umang Foundation chairman Ajai Srivastava has said there is no facility in the state to diagnose the disease. The patients have to go to the Post Graduate Institute of Medical Education & Research (PGIMER) in Chandigarh for the thalassemia test.


He said the patients going to the Indira Gandhi Medical College and Hospital (IGMCH) in Shimla and other hospitals for blood transfusion or treatment have to face difficulties due to poor infrastructure.

As per the Center's new directive, starting May 1, all nurses' recruitment from India for jobs abroad will be done by the two Kerala-run organizations.
Advertisement
At the IGMCH, a special ward has been earmarked for the thalassemic patients but it is non-functional, he said.

A health official, however, said the state would soon have screening centers to estimate the prevalence of beta thalassemia trait among people.

For this, Himachal Pradesh got Rs.40 lakh project sanctioned from the National Rural Health Mission (NRHM).

Around 2,500 people of marriageable age from colleges of Mandi, Kullu, Kangra and Shimla districts will be screened initially every year, project principal investigator Omesh Bharti said.

He said on the International Thalassemia Day, which falls on May 8, the health department would carry out disease sensitization drive in 1,500 senior secondary schools and 100 colleges in the state.

The NRHM project would include free genetic screening for thalassemia and treatment of those suffering from the genetic disorder. The carriers detected would be provided free genetic counseling and their identity would be kept confidential.

Studies indicate in India there are around 3 crore carriers of beta thalassemia gene and 7,600 babies affected with the disorder are born each year.

Bharti said there are estimated 200,000 carriers in Himachal Pradesh.

"But the genetic makeup of the hill population may be different," he said.

Another doctor, Rajesh Sood, said 68 thalassemia-affected children were detected in the state during a survey conducted by the state health department five years ago.

"At present, there might be over 100 children suffering from thalassemia in the state," he said.

The government will consider appointing people, who had undergone long treatments to cure themselves of leprosy, to vacant posts in the health department.
Advertisement
Advertisement
This site uses cookies to deliver our services.By using our site, you acknowledge that you have read and understand our Cookie Policy, Privacy Policy, and our Terms of Use  Ok, Got it. Close
×