Researchers Use Botox as an Experimental Model to Advance Science 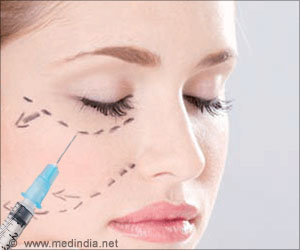 Botox made from botulinum neurotoxin (BoNT) is a trendy way to get rid of wrinkles. But, many do not realize that BoNT is one of the most potent biological toxins known to man.

One small dose of BoNT injected intravenously could easily paralyze and kill a human being. However, in a controlled dose and purified form, the toxin can be used for therapeutic purposes, helping treat a variety of diseases.

Botox injections, the fastest growing cosmetic procedures, are considered as the ultimate fountain of eternal youth.
Advertisement
‘The researchers used ALISSA technology to detect botox (BoNT) in biological samples like blood, serum and liquid foods such as milk or carrot juice.’

Currently, BoNT is being used for the treatment of neck spasms (cervical dystonia), eyelid spasms (blepharospasms), crossed eyes (strabismus), severe underarm sweating (hyperhidrosis), migraines and other primary headaches, depression  and is even being used with cancer therapies.


Scientist Markus Kalkum, Ph.D., professor in the Department of Molecular Immunology at City of Hope, tells us how his lab has developed a way to detect BoNT in biological samples using ALISSA technology, and how that work may be applied to cancer in the future.

Botox has proven to be a valuable agent for researchers at National Institutes of Health who have used the anti-aging agent to identify a new and important role for a group of molecules.
Advertisement
You are studying BoNT in your lab. What problem are you trying to solve?

In 2005, we won our first National Institutes of Health funded award to develop a sensitive detection process for Botulinum neurotoxins. Since the toxin is very potent, (30 picogram can kill a mouse, which is a very small amount  one one-trillionth of a gram), we were represented with a unique analytical challenge: How to detect a few hundred protein molecules in a complicated biological sample.

The same type of analytical problem exists when trying to detect other low abundant biomarkers for the purpose of diagnosis of other medical conditions such as infections or cancer.

So we were intrigued and excited to pursue a research project with the specific goal to detect one picogram or less of BoNT per milliliter of a given biological sample. The types of samples were blood, serum and liquid foods such as milk or carrot juice.

Blood was the first choice of the NIH due to obvious diagnostic interests, but liquid foods were also considered important because those had been involved in naturally occurring cases of botulism, the disease caused by BoNT, and were also feared to be potential targets of the deliberate release of BoNT in a bioterrorist attack.

Luckily, BoNT is an enzyme that cleaves, or splits, certain proteins in nervous tissue cells  this is how it attacks the body. The tool, or assay, that we came up with detects this enzymatic activity. We termed it ALISSA for "Assay with a large immuno-sorbent surface area."

Basically, the test consists of two steps. In step one, we enrich the BoNT molecules from a given sample on an immunocapture matrix. This matrix can consist of special, chemically derivatized beads or monolithic microcolumns. The matrix contains an antibody or immunochemical that binds the BoNT in a way that its enzymatic activity is preserved. The other components of the sample are then simply washed away.

In order to see if any BoNT was truly captured, we proceed to step two. Here we expose the ALISSA beads or columns to a fluorogenic peptide substrate that mimics the natural target of BoNT. When the bead-captured BoNT comes in contact with these peptide molecules, they are cleaved and become fluorescent.

One immobilized BoNT molecule can cleave billions of peptide molecules and for some reason this reaction works best when the BoNT is immobilized and stuck to the beads. The fluorescence release by the reaction can easily be detected with standard lab equipment.

What are you doing different than other labs studying BoNT?

Our assay is the most sensitive one in the world that really works on biological samples, not just lab samples with defined buffers or distilled water. We can detect as little as half an attomole of BoNT in a 0.5 mL sample. Such sensitivity is attractive and unrepresented when dealing with a potent toxin such as BoNT.

This has the potential to replace animal testing that is currently being pursued the clinical diagnosis of botulism. Also, we have automated the assay, which allows us to analyze up to 96 samples hands-off within a few hours.

What's next for your research with BoNT?

Our research on BoNT has taught us many valuable lessons. We are now able to expand the assay to other targets beyond BoNT. This means that we could use ALISSA technology to detect other diseases.

In fact, we are currently pursuing the detection of invasive fungal infections. They are difficult to diagnose and present a problem in cancer patients, and we have already made ample progress in detecting fungal enzymes in patient samples.

Furthermore, using BoNT as an experimental model, we are now engineering a bioluminescent readout for the assay. We anticipate that once completed; it could also be generalized and used for the detection of multiple disease markers in the future.

Regular Use of Botox Increases Risk of Resistance

The human body develops resistance to Botox over time and the beauty treatment may stop working altogether after a few years.
Advertisement
<< High Occupational Levels is a Risk Factor for Poor Response ...
Overall Mental Health Satisfaction Rate On The Decline In Th... >>

Men Twice as Likely to Have Botox by Dodgy Practitioners

A research suggests that men are putting their health at risk by allowing unqualified friends and dodgy practitioners to give them the muscle-freezing jab.