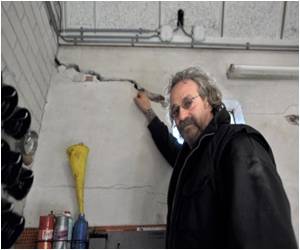 A new study shows a new theory behind the 'big bang' and existence of our universe 13.7 billion years ago.

Researchers from Three Perimeter Institute have a new idea, and have claimed that what is perceived as the big bang, could be the three-dimensional 'mirage' of a collapsing star in a universe profoundly different than our own.

While climatologists are concerned over global warming here on earth, researchers have found that the overall temperature in the universe has actually cooled down.
Advertisement

According to the scientists, the problem is that the big bang hypothesis has our relatively comprehensible, uniform, and predictable universe arising from the physics-destroying insanity of a singularity, which seems unlikely.

A revamp is being carried out by engineers to help the world's largest and most powerful atom smasher reach maximum energy levels with a 2-year hibernation period starting March.
Advertisement
They claimed that our universe was never inside the singularity, and had rather came into being outside an event horizon, protected from the singularity.

The researchers emphasized that this idea, though may sound "absurd," was grounded firmly in the best modern mathematics describing space and time.

The research is published in Scientific American.

The universe of cancer mutations may be much larger than expected, a new study across cancer types revealed
Advertisement
<< Digitalis-Derived Drugs Found to Increase Risk of Death Amo...
Wearing Gloves After Hand Washing Leads to Fewer Infections... >>

Drug Interaction Checker Post-Nasal Drip Pregnancy Confirmation Calculator Blood Donation - Recipients Calculate Ideal Weight for Infants The Essence of Yoga Drug - Food Interactions How to Reduce School Bag Weight - Simple Tips Sanatogen Nutam (400mg) (Piracetam)
This site uses cookies to deliver our services. By using our site, you acknowledge that you have read and understand our Cookie Policy, Privacy Policy, and our Terms of Use