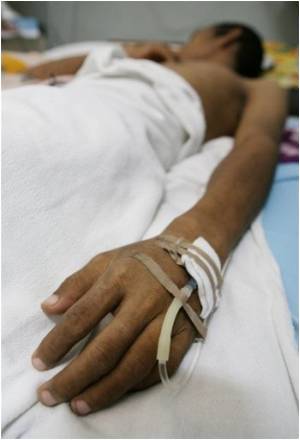 In a finding that could yield major benefits in the fight against AIDS in Africa, researchers said that HIV drugs can be administered as effectively by nurses as by doctors.

In a trial carried out at two South African front-line clinics, 408 patients with the human immunodeficiency virus (HIV) were assigned to antiretroviral (ART) drugs monitored by doctors, and 404 others to drugs monitored by nurses.

The goal was to see whether nurses were as observant and reactive as doctors in administering ART. Would they spot that a patient was responding to the drugs, failing in the treatment or suffering from toxic side effects?


A total of 371 patients encountered treatment failure over the 120-week length of the experiment, but the results were similar in both groups -- 192 in the nurses group and 179 in the doctors group.

Encyclopedia section of medindia explains in brief about the prevention for AIDS/HIV
Advertisement
Ten patient deaths occurred among the nurses group compared with 11 among the doctors. There were equally close results among patients who failed to respond to a specific ART combination, fell ill from them or dropped out of the programme.

"Nurse-monitored ART is non-inferior to doctor-monitored therapy," said the paper, published online by The Lancet. "Findings from this study lend support to task-shifting to appropriately trained nurses for monitoring of ART."

The findings are important because Africa, the worst-hit continent for AIDS, suffers from a chronic lack of doctors -- and health watchdogs have been wondering desperately whether less-trained personnel can be used as substitutes.

Of the 22.4 million people living with HIV in sub-Saharan Africa, an estimated 3.8 million are in urgent need of treatment.

But in South Africa, the wealthiest country south of the Sahara, there are only 17.4 doctors per 100,000 people, and these doctors are overwhelmingly concentrated in urban areas.

ART first became available in 1996, but for almost a decade, its high cost limited its spread to rich countries.

Further hampering distribution to Africa was the argument that the drugs were too complex to administer in resource-poor settings, as they required lab support and highly qualified personnel.

The new study, while approving the "task-shifting" to nurses, adds that staff still need to be trained to supervise use of these powerful drugs.

In addition, it found that patients in a severer stage of infection did somewhat better when monitored by doctors as opposed to nurses.

The research did not look at the question as to whether nurses performed well in initiating drug treatment. Under South African law, only doctors have the right to prescribe licensed drugs such as ART.

The investigation was carried out under the Comprehensive International Program for Research in AIDS in South Africa, a US-backed project which goes under the acronym of CIPRA-SA.