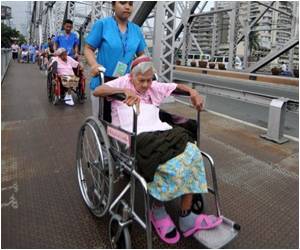 Duchenne muscular dystrophy (DMD), a severe and progressive muscle wasting disease that affects young boys, can be treated by increasing a specific protein in muscles, researchers have found.

Approximately one in every 3,500 boys worldwide is afflicted with DMD. There is no cure for the disease which causes muscle fragility, spinal curvature and premature death.

Results from the studies published in Nature today showed that by increasing levels of 'heat shock protein 72' (HSP72) in the muscles of animal models of DMD, muscle strength improved, the disease progression slowed and lifespan increased.


The research led by Professor Gordon Lynch, Head of the Department of Physiology at the University of Melbourne and conducted by Dr Stefan Gehrig for his PhD, investigated several scientific approaches of increasing the levels of the protein. The study was also performed in collaboration with Professor Mark Febbraio and his team at Baker IDI Heart and Diabetes Institute.

Muscular Dystrophy - An NGO's Crusade to Help the Society

Muscular dystrophy Association India's Dr. V. Vishwanathan spoke to Medindia about research and medical treatment for Muscular dystrophy arranged by MDAI.
Advertisement
One approach revealed that administering the drug BGP-15 (which increases HSP72) improved overall muscle function in limbs and the diaphragm, a muscle critical for breathing. In addition, the lifespan increased by 20 per cent.

The researchers also discovered that increasing HSP72 in muscles improved the function of a pump responsible for controlling calcium levels confirming it as a target for future therapeutic drugs for the disease.

"Our studies show that by increasing HSP72, we can improve calcium pump function which could be a way to help reduce the muscle breakdown in boys suffering the condition," Professor Lynch said.

"We hope that these exciting findings will serve as the basis for future clinical trials within the next five to 10 years," Professor Lynch said.

Researchers from The University of Oxford, UK and Deakin University, Australia also collaborated in the research. The project was supported by the National Health and Medical Research Council, The Heart Foundation, Association Française contre les Myopathies and the Muscular Dystrophy Association (USA). BGP-15 was provided by the pharmaceutical company N-Gene.

Detailed information on myotonic muscular dystrophy, a common form of muscular disease that affects adults and children.
Advertisement
Advertisement
This site uses cookies to deliver our services.By using our site, you acknowledge that you have read and understand our Cookie Policy, Privacy Policy, and our Terms of Use  Ok, Got it. Close
×