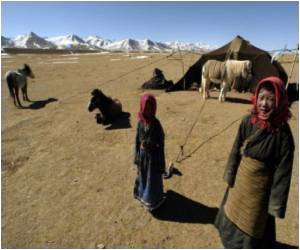 The researchers also found that taking acetazolamide (ACZ), a drug frequently prescribed to prevent altitude illness, can reduce some of the risk factors associated with SHAI.

The Chinese government claims that its soldiers guarding the borders with India and Tajikistan are longer dying of altitude sickness. Adequate care is being taken of them, it asserts.
Advertisement
The researchers measured these parameters in controlled, hypoxic conditions in a lab setting that mimicked high-altitude conditions.

"These results suggest that HCRe, HVRe and substantial decreases in Sae are independent risk factors of SHAI, and that decreases in Sae and HVRe can be used to accurately predict the risk of developing SHAI," said Jean-Paul Richalet, MD, PhD, a professor of physiology at Universit? Paris 13.

"To date, this is the largest epidemiological study of subjects exposed to high altitude-related illness, who were previously evaluated for their responses to hypoxia," he added.

The researchers collected data from 1,326 men and women who were seen prior to high-altitude excursions, which included at least 3 days above 4,000 meters with overnight sleeping above 3,500 meters.

Next, study participants went through a routine hypoxic exercise test, which consisted of four, four-minute phases: rest at normal oxygen levels; rest at hypoxic levels; exercise in hypoxia; and exercise in normal levels of oxygen. During the exercise test, the researchers measured heart rate, breathing and blood oxygen levels.

Following their excursions, study participants were asked to complete a questionnaire to determine if they had experienced any symptoms of high altitude illness.

Among the 1,326 questionnaire respondents, 318 reported that they had experienced a severe altitude illness during their high-altitude excursion, including 105 who used ACZ and 213 who did not.

Researchers also found that preventive use of ACZ resulted in a 44 percent reduction in the risk of developing SHAI.

The study has been published in the American Journal of Respiratory and Critical Care Medicine.

Adapting to Altitude - A Study on Tibetans

Tibetans have adapted to life at high altitudes in less than 3,000 years, according to a new study that could, in the light of this information, focus on pre-birth oxygen deprivation diseases.
Advertisement
<< Novel Tool for Targeted Cancer Drug Development
Toxic Pollutants Detected in Accra, Ghana >>