A new target for the development of anti-carving medications for people with addictive behaviors has been identified by researchers.

The new discovery by the Scientists at the Centre for Addiction and Mental Health (CAMH) centres on a brain receptor related to the chemical dopamine, which has a complex role in addictive behaviours.


Using brain scans and a novel chemical probe developed in CAMH's Research Imaging Centre, CAMH scientists found that the probe had high levels of binding to the dopamine D3 receptor in some people with methamphetamine addiction, compared with those who had no addiction.

"This is the first time, to our knowledge, that anyone has shown that D3 receptor levels are high in people with an active addiction to methamphetamine," said Dr. Isabelle Boileau, a scientist in the Research Imaging Centre, part of the new Campbell Family Research Institute at CAMH, who led the study.

Using positron emission tomography (PET), Boileau's team looked at D3 levels in 16 people who were dependent on methamphetamine. Participants abstained from methamphetamine use for 14 days prior to brain scans.

Their results were compared with scans from 16 participants with no addiction. On a separate day after scanning, participants were given a low dose of amphetamine, and they had to report how much they wanted to use drugs.

D3 receptors appear to have a role in craving, but it is not fully established how they are related to drug-related behaviours.

The new chemical probe developed at CAMH, called 11C-(+)-PHNO, binds to dopamine D3 receptors. This probe allows researchers to study D3 in people for the first time, using PET scans, in order to answer questions about its role in stimulant addiction.

Understanding the role of brain receptors in addiction has enabled researchers to develop treatment medications, such as nicotine replacement therapy for smoking. So far, therapeutic strategies for stimulant addiction have focused on increasing activity with D2 receptors, where binding levels have been low.

"We can now suggest that any therapeutic approach aimed at increasing activity with D2 receptors should consider being selective at targeting D2, and not increasing D3 levels. Our finding also supports the idea that D3 should be considered another target for anti-craving medications," said Boileau.

The study has been recently published in The Journal of Neuroscience. 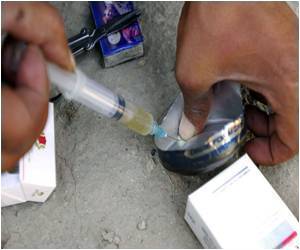 Scientists Reveal Promising Formulations for Methamphetamine Addiction Vaccine
The development of three promising formulations that could be used in a vaccine to treat methamphetamine addiction is being reported by scientists.
READ MORE