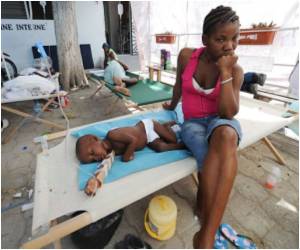 Had a large stockpile of oral cholera vaccine been available and deployed to inoculate the majority of Haitians most at risk after the outbreak following last year''s earthquake, the illness and death from the cholera epidemic could have been reduced by about half, according to new research.

The findings, by Ira Longini, Ph.D., and colleagues in the Vaccine and Infectious Disease Division of Fred Hutchinson Cancer Research Center, are published in the April 11, 2011 early edition of the Proceedings of the National Academy of Sciences.

Up to 800,000 Haitians will contract cholera this year, double the estimates of UN agencies, a report published by The Lancet on Wednesday claimed.
Advertisement

Using computer models that replicated the spread of the epidemic that began last October, the researchers simulated various proactive and reactive vaccination strategies. They found that vaccinating 50 percent to70 percent of people in targeted, high-risk areas after the disease outbreak would reduce morbidity and mortality by roughly 50 percent. The amount of vaccine in this scenario would be equivalent to inoculating about 30 percent of a country''s total population.


"We show that while you cannot completely control epidemic cholera with vaccines alone, you can certainly greatly reduce the number of cases and deaths, especially if you combine it with some pretty modest sanitation interventions," said Longini, a member of the Center for Statistics and Quantitative Infectious Diseases at the Hutchinson Center and professor of biostatistics at the University of Washington School of Public Health.

Sudden deaths in Haiti have led the health authorities in the region to conduct an investigation to ascertain the cause.
Advertisement
Longini and Hutchinson Center coauthor M. Elizabeth Halloran, Ph.D., and lead author Dennis Chao, Ph.D., recommend that a comprehensive global plan be developed for the use of cholera vaccine to treat epidemic cholera. Distribution could be coordinated through global and regional public health organizations such as the World Health Organization and Pan American Health Organization.
The authors note that the current cost of the two existing vaccines, at $5 and $1.50 per dose, make a good case for international investment in production and distribution of a stockpile.

Currently, cholera vaccines are in short supply and little is known about effective vaccination strategies for epidemic cholera, according to the study.

"We expect cholera epidemics to appear in other regions of the developing world and we believe that we should have a plan in place to mitigate them" said Dennis Chao.

The computer models used by the researchers showed that randomly pre-vaccinating a fraction of the population before an epidemic begins can reduce the number of cholera cases roughly in proportion to the number of individuals vaccinated and delay the epidemic peak. However, this is not as effective in combating an epidemic outbreak as concentrating efforts in regions at risk of high exposure to cholera, although it is difficult to know in advance where there regions would be.

"Further research will be needed for the effective identification of high-exposure areas in developing countries where cholera vaccines can be effectively targeted when needed," said Halloran.

In the case of Haiti, the 2010 epidemic occurred after a 100-year absence of cholera in the country. By mid-February 2011, more than 234,000 cases and 4,500 deaths had been reported. Cholera is a waterborne disease that affects 3 million to 5 million people annually, mostly in the developing world.

"The most recent example of Haiti demonstrates that areas that have not seen cholera in decades can be vulnerable under the combination of poverty, lack of or destruction of infrastructure, weather and natural disasters, conditions in which cholera thrives," the authors wrote.

Nutam (400mg) (Piracetam) Color Blindness Calculator Find a Hospital Post-Nasal Drip Drug Interaction Checker Iron Intake Calculator The Essence of Yoga Diaphragmatic Hernia Indian Medical Journals Blood Pressure Calculator
This site uses cookies to deliver our services. By using our site, you acknowledge that you have read and understand our Cookie Policy, Privacy Policy, and our Terms of Use