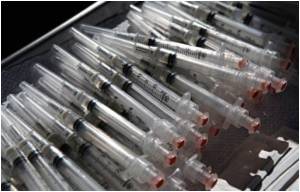 Researchers are currently developing a new vaccine to treat cytomegalovirus (CMV) infection, which is the leading infectious cause of congenital birth defects, affecting one in every 750 children born who develop permanent disabilities such as brain damage or hearing loss.

Researchers from the La Jolla Institute for Allergy & Immunology and Cardiff University in Wales (UK) have discovered a previously unknown cellular mechanism that could prove critical in creating a CMV vaccine. "We have identified a novel trick that this virus uses to hide from immune detection," says La Jolla Institute scientist Chris Benedict, Ph.D., a CMV expert. "By uncovering this mechanism, we''ve provided an important piece of the CMV puzzle that could enable vaccine counter strategies that flush out and eliminate virus-infected cells." The finding was published online today in the journal Cell, Host & Microbe.

Ed Mocarski, Ph.D., a scientist at the Emory University School of Medicine''s Vaccine Center, praised the discovery for identifying some of the key cells involved in the ongoing tug-of-war between CMV and the immune system. "This finding puts on the table the importance of TRAIL signaling in host (our body''s) defense and how the virus works to block these efforts," says Dr. Mocarski, whose research focuses on new ways to combat CMV. "This knowledge could set the stage for developing ways to boost the adaptive immune response which could ultimately aid in developing an effective vaccine."


Now listed as a 'high priority'' for vaccine development by the National Institute of Medicine, an advisory organization on health issues, cytomegalovirus is very familiar to scientists, but little known by the public. "More children have disabilities from this disease than other well-known congenital problems, such as Down''s syndrome or fetal alcohol syndrome," says Dr. Benedict, who notes that the virus'' stealthy nature keeps it under wraps. CMV is part of the herpes family of viruses that cause cold sores, the chicken pox, shingles, mononucleosis, and other maladies, and once contracted it never goes away. Transmission is believed to occur through saliva, urine, and other body fluids, with about 50 percent of Americans infected by age 20, increasing to more than 80 percent by age 80.
Advertisement
Most people are unaware they have contracted the virus, nor generally do they exhibit any visible symptoms although they carry it for life. However, research shows that the immune system has to fight extremely hard to keep CMV at bay. "In addition to causing terrible birth defects and severe disease in immune compromised patients, CMV induces changes in the immune system in anyone carrying the virus," says Professor Gavin Wilkinson at the Cardiff University School of Medicine and co-leader of the research team. This constant struggle to control CMV is believed to contribute to tiring the immune system over time.

In their study, the researchers found that a specific CMV protein, known as UL141, blocks the ability of two key immune pathways to kill CMV-infected cells. As their name implies, these two pathways - known as TRAIL "death receptor" 1 and 2 - are normally quite effective at destroying infected cells. In addition, the TRAIL death receptors have been actively targeted in the context of anti-tumor therapies for the last decade, with many phase I and II clinical trials underway or completed.

"While important in cancer, it has also become quite clear that TRAIL signaling by the immune system is very significant in viral infections, such as CMV," says Dr. Benedict. "By discovering that this protein (UL141) inhibits TRAIL''s ability to carry out its killing function, we believe we have revealed a pivotal piece of the cellular apparatus that needs to be considered when developing an effective vaccine."

As part of exploring CMV, Dr. Benedict also teamed up with La Jolla Institute scientist Dirk Zajonc, Ph.D., a structural immunologist who used X-ray crystallography to determine the three dimensional architecture of the viral protein UL141 bound to the cellular receptor TRAIL-R2 at the atomic level. The results of their study are to be published in another research journal near the end of March.

The TRAIL molecule and its receptors were discovered about 15 years ago and are members of the tumor necrosis factor family of molecules, which have proven extremely important in medical research efforts to control or prevent many diseases. The research team''s finding was the first to identify a viral protein as interacting directly with the TRAIL death receptors.

About La Jolla Institute
Founded in 1988, the La Jolla Institute for Allergy & Immunology is a biomedical research nonprofit focused on improving human health through increased understanding of the immune system. Its scientists carry out research seeking new knowledge leading to the prevention of disease through vaccines and the treatment and cure of infectious diseases, cancer, inflammatory and autoimmune diseases such as rheumatoid arthritis, type 1 (juvenile) diabetes, Crohn''s disease and asthma. La Jolla Institute''s research staff includes more than 150 Ph.D.s and M.D.s. To learn more about the Institute''s work, visit www.liai.org.

About Cardiff University
Cardiff University is one of Britain''s leading teaching and research universities and a member of the Russell Group of the UK''s most research intensive universities. Among its academic staff are two Nobel Laureates, including the winner of the 2007 Nobel Prize for Medicine, University Chancellor Professor Sir Martin Evans. Founded by Royal Charter in 1883, today the University''s breadth of expertise in research and teaching encompasses: the humanities; the natural, physical, health, life and social sciences; engineering, technology and lifelong learning. Three major new Research Institutes, offering radical new approaches to neurosciences and mental health, cancer stem cells and sustainable places were announced by the University in 2010. www.cardiff.ac.uk

Environmental Birth Defects
Birth defects caused due to environmental teratogens like drugs, microorganisms or exposure to ......