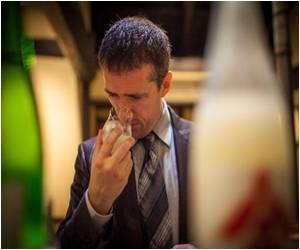 At McGill University, Green-chemistry researchers have discovered a way to use water as a solvent in one of the reactions most widely used to synthesize chemical products and pharmaceuticals.

The findings, published June 26 in Nature Communications, mark a potential milestone in efforts to develop organic reactions in water.

New Light on Illness and Health Shed By Chemistry Breakthrough

Imaging technology is growing ever more vital in the world's hospitals. It is commonly used whether for the diagnosis of illness or for research into new cures.
Advertisement

Chao-Jun Li and Feng Zhou of McGill's Department of Chemistry report that they have discovered a catalytic system which for the first time allows direct metal-mediated reactions between aryl halides and carbonyl compounds in water.


For the past two decades, researchers have been exploring ways to do away with chemists' traditional reliance on non-renewable petrochemical feedstocks and toxic solvents. One important method has involved replacing the toxic solvents used in metal-mediated reactions with water - something that was previously considered impossible.

Honeybees' Changing Roles Throughout Their Lives Linked to Brain Chemistry

An increasing range of behaviors and inclinations from monogamy to addiction have been linked by scientists to the underlying biology in animals and humans.
Advertisement
While researchers at McGill and elsewhere have succeeded in using water in metal-mediated reactions between carbonyl compounds and other halides, attempts to do so for the most challenging reaction, between aryl halides and carbonyl compounds, have never worked - until now.

Prof. Li and Dr. Zhou, a postdoctoral fellow, found that rhodium -- a metal primarily used in the catalytic converters of automobiles -- as a catalyst together with zinc as a mediator can make the reaction possible in water. This new technique bypasses a number of challenges posed by conventional practices in carrying out this reaction, which is widely used in synthesizing fine chemicals, biologically active molecules and pharmaceuticals. Traditional methods, discovered more than a century ago, require that moisture and air be carefully excluded from the process.

The way in which reduced ignition propensity bands influence cigarette burn rate and possibly the chemical composition of the resulting smoke has been explained by scientists.
Advertisement
<< Men Hold 8 Out of 10 'Top Positions' in US: Facebook
Blinding Disease in Premature Babies Caught by Telemedicine >>

Water - Nutrient that Beats the Heat
News Archive
News Resource
News Category
Can Monoclonal Antibody Prevent Malaria? First Monkeypox Case in a Child Confirmed in Germany Nip Bedsores in the Bud With a Self-monitoring Mattress Dementia Risk and Heart Defects: Are They Related? How to Decipher a Baby's Cry of Pain?
More News
Sign up for Wellness Consult a Doctor Sign up for Selfcare

More News on:
Water - Nutrient that Beats the Heat