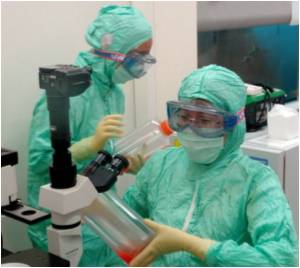 At the San Diego State University, a team of biologists have developed a platform for identifying drugs that could prove to be effective against a variety of viral diseases. The team used dengue virus as an example and they identified a novel drug which may someday be used to combat the disease.

Over the past several years, the researchers led by biologist Roland Wolkowicz have been developing cell-based platforms that can be used to monitor the biomolecular activity of viruses inside their host cells.

Based on a platform previously created for HIV, Wolkowicz and his team built a new platform for dengue virus. The Wolkowicz team's platform screens host cells to detect whether or not a particular protein function of dengue, known as pre-membrane protein (prM) cleavage, has occurred.


The prM cleavage process is important for new viral particles to be able to infect a host cell. Preventing the cleavage from happening could effectively stop the virus in its tracks.

The reason why measles is so much more contagious than other respiratory viruses has been discovered by Mayo Clinic researchers.
Advertisement
"Cleavage is absolutely critical to the virus's life cycle. While the role of prM cleavage is not completely understood, new particles won't mature without it. By blocking prM cleavage, you clearly diminish the virus's ability to infect other cells," explained Wolkowicz.

His lab's technique embedded two biomolecular tags - a "red" tag and a "green" tag, so-called because of the fluorescent antibodies that detect them - inside an infected cell. The tags are designed in such a way that if cleavage occurs, one of them falls off.

Using this technique, the team tested 1,280 drug compounds to see whether any of them could block prM cleavage to yield a green tag, preventing a critical step in the dengue viral life cycle.

According to Wolkowicz, the results demonstrate just how robust and powerful their platform is for identifying drug candidates for fighting viruses.

Dengue infects between 50 and 100 million people each year and has no known vaccine or treatment. Some 22,000 people die each year from the disease, says a World Health Organization (WHO) report.

Researchers have identified a compound that inhibits the replication of different viruses, including the highly aggressive SARS virus that is responsible for severe acute respiratory
Advertisement
Advertisement