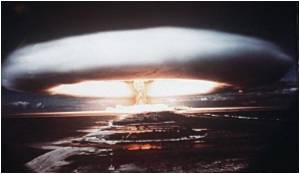 The girl's voice shook as she stood in front of some of the world's top scientists and told them "I am one of the statistics that you will be studying."

Sarah Saurer was seven years old when she was diagnosed with brain cancer.

Children under five years old living near nuclear power stations have contracted cancer at a greatly higher rate than the national average, a study by the German government said Saturday.
Advertisement

Her parents soon found out that several other children in their small town -- which sat just miles away from two troubled Illinois nuclear power plants -- had been diagnosed with brain cancer and leukemia.


Then news broke that one of the plants had been leaking radioactive water for years before it was detected. A quick survey by concerned mothers found that every single home within a quarter mile of the spill housed someone who'd been diagnosed with cancer.

Neighbours of California's Nuclear Plant Say Life is Good; No Threat to Their Lives

Year-round sunshine, beautiful beaches, a dream lifestyle: for residents near California's San Onofre atomic power plant, Japan's nuclear crisis seems a world away.
Advertisement
"I want to remind you how important it is to protect people from the harmful things that are being put into our environment," Sarah Saurer told the scientists, her short stature and child-like face showing little sign of her 17 years.

"I hope that in this study you will remember who you are doing this study for. It is for me and all of the other kids and people who live near nuclear power plants."

The scientists were meeting in a Chicago suburb Monday as they work to design a major study to analyze the cancer risks associated with living near nuclear power facilities.

It's a topic that has long worried residents and is particularly timely given the renewed concerns about nuclear power in the wake of the ongoing meltdown at Japan's tsunami-crippled Fukushima plant.

The answers will be a long time coming.

"These are tough questions," said John Burris, a biologist who is chairing the study board established by the National Academy of Science.

It will take the board at least until the end of the year to develop the methodology for how to design the study.

Then -- if the Nuclear Regulatory Commission provides funding for the second phase -- the real work of collecting and analyzing the data begins.

One of the biggest challenges will be teasing out whether cancer incidents are linked to low-level radiation discharges by nuclear plants or if they were caused by other factors, Burris said.

That will likely take years.

In the meantime, nuclear regulators and operators struggle to reassure the public that US plants are safe.

Viktoria Mitlyng grew up in Kiev and her childhood was scarred by the Chernobyl disaster and her own bout with leukemia.

She now handles public relations for the Nuclear Regulatory Commission in Illinois and is convinced that the US government is doing everything it can to protect the public.

The undetected leak at the Braidwood plant should never have happened and certainly should have been detected sooner, Mitlyng said.

But it was the only spill which has ever occurred outside of one of the country's 65 nuclear power sites. And the amount of radioactive trillium which leached into the groundwater was just a fraction of acceptable levels.

"To date, there is no scientific evidence that very low levels of radiation can cause health issues," Mitlyng said on the sidelines of the conference.

"That's why this study is being commissioned."

Saurer's parents don't need to wait for the study results.

Her father, a practicing gynecologist with a degree in biomedical engineering, did his own study and is convinced that her cancer was caused by low-level radiation from the plants.

Using public data, he compared cancer rates of people living within 15 miles of the troubled Dresden and Braidwood plants and found they were significantly higher than state-wide averages.

He told the study board that he tried submitting the results to local health officials and nuclear regulators, but got sent to lawyers instead of scientists for review.

"The world has been focused on the devastation in Japan. It has brought a lot of focus on the risk of living near a nuclear plant," Joseph Saurer said.

"I am more worried about the daily man-made disasters at these plants. Over time, these are taking a great toll on the public."

President Barack Obama ordered a comprehensive review of US nuclear safety in the wake of the March 11 quake and tsunami that knocked out power at the Fukushima Daiishi nuclear complex, shutting down systems for cooling radioactive fuel rods.

A similar review was conducted in the wake of the terrorist attacks of September 11, 2001 to ensure that the plants were safe from sabotage or attack.

"We'll go as far as we need to go to make sure the plants are as safe as possible," said Mitlyng of the Nuclear Regulatory Commission.

"Less than one percent (of radiation exposure) comes from industries such as nuclear power. If this fraction is shown to have a direct impact on human health then our effluent limits would have to change."

When it comes to broader issues of nuclear safety the commission is committed to doing everything it can to protect the public from a potential meltdown, she said.

Workers at the Fukushima nuclear plant should have their blood stem cells stored as a safeguard to treat radiation injury later, urge Japanese doctors.
Advertisement
<< Can a Cancer Marker also Become Treatment?
Future Back Pain Alleviated With Immediate Physiotherapy Tr... >>