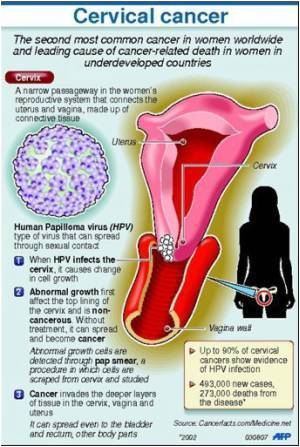 A significant advance in the treatment of cervical cancer has been made by a medical researcher at the University of Leicester.

Dr Paul Symonds from the Department of Cancer Studies and Molecular Medicine has demonstrated that the use of a particular drug in collaboration with radiotherapy gives significantly better results than radiotherapy alone.

The study used the case histories of 1,412 patients from 42 different cancer treatment centres which were collected in 2001-2 as part of an audit which Dr Symonds led for the Royal College of Radiologists. This information included not only the treatment used but also follow-up notes which continued for five years on average, indicating whether or not cancer recurred in the pelvic area.


The new research, supported by the Medical Research Council (MRC), studied the use of a drug called cisplatin, a platinum-based molecule which directly affects the DNA strands within cells to cause controlled cell death or 'apoptosis'. It was already known that a combination of radiotherapy and cisplatin was more effective than radiotherapy alone in curing cancer of the cervix but there was no reliable data on the long-term effects of the combined treatment.
Advertisement
Working with colleagues in London and Manchester, Dr Symonds examined the long-term survival rates of patients after the treatment was complete. Complex statistical analysis was used to eliminate variable factors in comparing radiotherapy with 'chemoradiotherapy'.

The results showed that the addition of cisplatin to radiotherapy treatment of cervical cancer reduces the likelihood of death by a full 23 per cent. This is an important breakthrough and will be featured in the September issue of the publication Clinical Oncology alongside an editorial written by patients who have recovered through the dual treatment and another editorial presenting a doctor's view.

Dr Symonds, who is also a Consultant Clinical Oncologist at Leicester Royal Infirmary, said: "The addition of cisplatin to radiation has literally saved the lives of hundreds of women with locally advanced cancer in the east midlands.

"This audit showed a marked improvement in 5-year survival of locally advanced cervix cancer compared to the last national audit of patients who were treated in 1993. Moreover the UK results, as derived from a total of 42 centres (most district general hospitals) show that the results in the UK are now compatible with the best international practice."

Cervical Cancer - Incidence
Cervical cancer is the second most common cancer among women and is the primary cause of ......