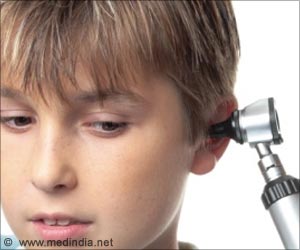 Two critical periods that occur soon after onset of hearing could regulate how sounds from each ear are fused to lead to a coherent representation in the brain, according to a new study conducted by researchers at Massachusetts Eye and Ear that has been published in the journal Nature Communications.

Hearing scientist Daniel Polley, Ph.D., an investigator at Massachusetts Eye and Ear/Harvard Medical School's Eaton-Peabody Laboratories of Auditory Physiology and collaborators found by inducing a brief, reversible hearing loss at key milestones in cortical development, they identified two critical periods occurring after hearing onset that regulate the maturation of coordinated binaural sound representations. Their work could eventually lead to a better understanding of which periods in a child's development are most crucial to maintain hearing.

Ideally, screening tests for hearing loss should be conducted before the infant is 1 month of age.
Advertisement

Degraded sensory experience during critical periods of childhood development can have detrimental effects on the brain and behavior. In the classic example, a condition called amblyopia (also known as lazy eye) can arise when balanced visual signals are not transmitted from each eye to the brain during a critical period for visual cortex development. In this study, researchers set out to determine how temporary disruption of hearing at precise times in development affect the ability for the brain to hear once hearing is restored.


"The goal of this study was to mimic the moderate, short-term hearing loss that can accompany ear infections in human infants and then study how and when the encoding of auditory signals was disrupted in the brains of developing mice."

Presbycusis (age related hearing loss) is the gradual loss of hearing that occurs as people get older. Presbycusis involves progressive sensorineural hearing loss.
Advertisement
Much like starting up a computer, the brain "boots" itself during development beginning with the basic firmware and culminating with higher-level software elements. Unlike a computer, the brain relies on experience from the surrounding sensory environment to complete its startup process. If sensory experience is degraded during these critical periods in early life, as would occur with a visual cataract or conductive hearing loss that can accompany an ear infection, the brain's representation of the sensory world can be distorted in a specific and enduring way, even after the physical deficit in the eye or ear has been corrected. In this study, researchers found that creating a temporary hearing loss one day after hearing begun disrupted the basic alignment of sound frequency selectivity in the mouse cortex, whereas the same manipulation initiated just a few days later interfered with the neural computation of loudness differences between the ears.

"These findings demonstrate that brief bouts of asymmetric hearing loss during very specific points in postnatal development can have a lasting effect on brain circuits that compare and integrate the sound waves that enter each ear," said Dr. Polly. "According to pediatric audiology studies and the latest U.S. census data, approximately 12% of children (or 2.6 million children in the United States alone) will experience at least one bout of otitis media severe enough to cause a brief, mild conductive hearing loss before reaching five years of age. Though our study was conducted in an animal model, these data support a growing body of work that underscores the importance of minimizing hearing loss or excessive environmental noise for healthy infant brain development."

Hearing aid is an electronic device that helps people with hearing loss to hear more and communicate more effectively. Only 1 out of 5 people benefit from a hearing aid.
Advertisement
<< Zinc Deficiency may be Linked to Alzheimers and Parkinson...
Governments Not Successful in Clamping Down on Illegal Drug... >>