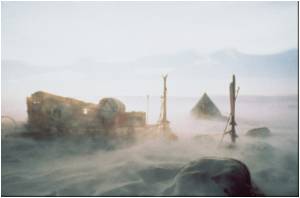 The way in which polar bears successfully adapted to life in the high Arctic environment has been revealed by researchers.

The analysis in the study included blood and tissue samples from 79 Greenlandic polar bears and 10 brown bears from Sweden, Finland, Glacier National Park in Alaska and the Admiralty, Baranof, and Chichagof (ABC) Islands off the Alaskan coast.

The results reveal that the polar bear is a much younger species than previously believed, having diverged from brown bears less than 500,000 years ago, and also uncovered several genes that may be involved in the polar bears' extreme adaptations to life in the high Arctic.


The genes pinpointed by this study are related to fatty acid metabolism and cardiovascular function, and may explain the bear's ability to cope with a high-fat diet while avoiding fatty plaques in their arteries and the cardiovascular diseases that afflict humans with diets rich in fat.
Advertisement
These genes may provide insight into how to protect humans from the ill effects of a high-fat diet.

The genome analysis comes at a time when the polar bear population worldwide, estimated at between 20,000 and 25,000 individuals, is declining and its habitat, Arctic sea ice, is rapidly disappearing. As the northern latitudes warm, its distant cousin the brown or grizzly bear (Ursus arctos) is moving farther north and occasionally interbreeding with the polar bear (U. maritimus) to produce hybrids dubbed pizzlies.

One of the most strongly selected genes is APOB, which in mammals encodes the main protein in LDL (low density lipoprotein), known widely as "bad" cholesterol. Changes or mutations in this gene reflect the critical nature of fat in the polar bear diet and the animal's need to deal with high blood levels of glucose and triglycerides, in particular cholesterol, which would be dangerous in humans.

Eline Lorenzen, one of the lead authors of the study, noted that the evolution of a new metabolism to deal with high dietary fat must have happened very quickly, in just a few hundred thousand years, because we know that polar bears already subsisted on a marine diet 100,000 years ago.

The study has been published in the journal Cell.

Study Reveals How Polar Bears Stay Warm
Genetic adaptations related to the production of nitric oxide, a compound that cells use to help ......