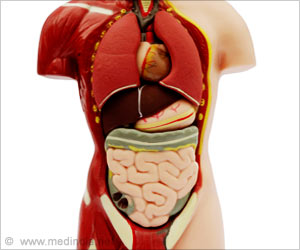 "This study identifies a set of bacteria that are associated with symptoms, and a group of anti-inflammatory genes that are associated with intestinal damage in children with Crohn's disease," comments Lee A. Denson, MD, of Cincinnati Children's Hospital Medical Center.  The new findingspublished online today by the Journal of Clinical Investigationmay lead to new approaches in the diagnosis, classification, and treatment of IBD.


In the CCFA-sponsored RISK study, researchers performed in-depth microbiological and gene expression studies in tissue samples (biopsies) from the ileumthe lowermost portion of the small intestinein a large group of children with Crohn's disease.  The samples were obtained at the time of diagnosis and before the start of treatment.  The goal was to evaluate the bacteria and immune responses associated with IBD in children, and how these factors affect the course of the disease.
Advertisement
As in previous reports from the RISK study, there was a shift in the types of bacteria present in the ileum of children with newly diagnosed Crohn's disease.  Increases in certain types of bacteria and decreases in other types were strongly linked to the clinical severity of disease.

The researchers also identified a "core" gene expression signature in the ileum of children with Crohn's disease.  The genes involved have been linked to the inflammatory changes in the gut.  In addition, certain genes in the core signature appeared to be specifically associated with intestinal damage, in the form of deep ulcers.

"Both the levels of bacteria and the anti-inflammatory genes predicted the likelihood that a child would experience remission without needing steroids or surgery during the first year after diagnosis," according to Dr. Denson.  Information on the presence of these bacterial and gene expression factors improved accuracy in predicting the outcomes of treatment, compared to a conventional model based on clinical factors only. This information might help doctors in targeting patients who can benefit from more-intensive treatment for Crohn's diseaseparticularly as newer "biological" therapies for IBD become available.  The results also suggest that treatments to modify the bacterial population of the ileum may be necessary to achieve lasting clinical responses.

Research has shown that the way in which a person's body response to intestinal bacteria plays a role in the development of Crohn's disease.  The RISK study seeks to supply direct evidence for these interactions at the onset of IBD and is collaborating with CCFA's Microbiome and Genetics Initiatives:  two major research programs attempting to understand the interrelated microbial and genetic factors involved in IBD.

Quiz on Crohns Disease
inflammatory bowel disease. Test your knowledge on Crohn's disease by taking this ......

New Knowledge About Our Intestines Uncovered
500 previously unknown microorganisms in human intestinal flora have been mapped by DTU Systems ......