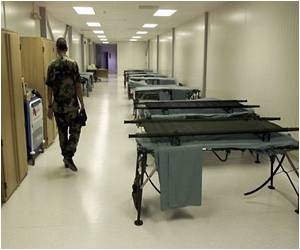 The findings, published in the peer-reviewed journal PloS Medicine, come in the wake of a host of secret US documents released by WikiLeaks, shedding light on conditions in the US military prison in Cuba.

Co-authored by a retired army brigadier general and an expert with Physicians for Human Rights, the study is based on a review of the medical records and legal files of nine inmates at the US "war on terror" prison.


The authors call into question whether military doctors, who like their civilian colleagues generally adhere to the Hippocratic Oath to do no harm, should have done more when confronted with potential signs of abuse or torture.

Tattoos - The Latest Craze Among US Soldiers Camped at Guantanamo Bay!

Soldiers in the US now have a new way to rejuvenate - getting tattoos. A new body art parlour has opened at Guantanamo Bay above an Irish bar that offers its services to the country's
Advertisement
The Department of Defense did not immediately respond to a request for comment.

Military doctors noted the sudden onset of post-traumatic stress symptoms in some inmates who had no history of mental problems, heard stories of rape and documented bone fractures, contusions and lacerations, but they did not question the cause, the study said.

"The medical doctors and mental health personnel who treated the detainees... failed to inquire and/or document causes of the physical injuries and psychological symptoms they observed," it said.

In one case, a clinician with the Defense Department's Behavioral Health Service noted a detainee's suicidal thoughts, memory lapses and nightmares, and prescribed antidepressants.

"(You)... need to relax when the guards are being more aggressive," the inmate was told, according to medical records cited by the study.

Reports have already come to light of alleged complicity by CIA doctors and psychologists and DoD behavioral consultants, described by the US government as "non-clinical" experts who were present during the so-called enhanced interrogation techniques such as waterboarding.

But according to lead author Vincent Iacopino, this study focuses on Defense Department medical personnel -- doctors and psychologists -- who directly cared for Guantanamo inmates and whose role has been largely obscured.

"There has been no information to date on the role of those health professionals in turning a blind eye, as the paper has indicated, until this time," Iacopino told AFP.

The study does not name the clinicians involved. Iacopino said the doctors' names had been redacted from the documents they consulted, but would be available to those with classified access.

In addition to reports by the detainees of facing enhanced interrogation techniques which were authorized by the George W. Bush administration, all nine reported facing "unauthorized" acts.

Those included "severe beatings, often associated with loss of consciousness and/or bone fractures, sexual assault and/or the threat of rape, mock execution, mock disappearance, and near asphyxiation from water (i.e., hose forced into the detainee's mouth) or being choked," the study said.

"Other allegations included forcing the detainee's head into the toilet, being used as a human sponge to wipe the floor, and desecration of the Koran."

The team of non-governmental medical experts that reviewed the files also admitted facing obstacles in reporting the full extent of what happened.

"Nearly all" of the doctor visits "were initiated after suicide attempts and/or detainee hunger strikes," and notes taken by military doctors "indicate that their visits were unwelcome and the detainees often refused to cooperate," said the study.

Some medical records were heavily edited by military censors, and since the study is limited to nine cases, the study authors noted they could not extend the findings to allege that similar treatment happened to other detainees.

"Nevertheless, these findings reveal new information about the potential extent of medical complicity in US torture practices, and they highlight the need for a thorough and impartial investigation of all the available information, including relevant classified information," the study said.

"The commission and/or concealment of acts of torture should never be justified by any health professionals -- clinical, non-clinical, military, or non-military."

Accident and Trauma Care How to Reduce School Bag Weight - Simple Tips Calculate Ideal Weight for Infants Turmeric Powder - Health Benefits, Uses & Side Effects The Essence of Yoga Noscaphene (Noscapine) Nutam (400mg) (Piracetam) Blood Pressure Calculator A-Z Drug Brands in India Sinopril (2mg) (Lacidipine)
This site uses cookies to deliver our services. By using our site, you acknowledge that you have read and understand our Cookie Policy, Privacy Policy, and our Terms of Use