Replenishing adenosine stores works well as a treatment for osteoarthritis with no apparent side effects, reports a new study. The findings of the study are published in the journal Scientific Reports.

The study results revolve around the long-established idea that machines within the animal and human cells turn the sugars, fats, and proteins we eat into energy used by the body's millions of cells. The molecule most used to store that energy is called adenosine triphosphate, or ATP. Along with this central role in metabolism, adenosine also helps signal other cells and serves as a building block of genetic material, and so is central to the growth of human tissue.

In the new NYU Grossman School of Medicine-led study, researchers injected adenosine into the joints of rodents whose limbs had been damaged by inflammation resulting from either traumatic injury, such as a torn ligament, or from massive weight gain placing pressure on joints. The biological damage in these cases is similar, researchers say, to that sustained in human osteoarthritis.


Publishing online in the journal Scientific Reports on Aug. 10, the study rodents received eight weekly injections of adenosine, which prompted regrowth rates of cartilage tissue between 50 percent and 35 percent as measured by standard laboratory scores.

"Our latest study shows that replenishing adenosine stores by injection works well as a treatment for osteoarthritis in animal models of the disease, and with no apparent side effects," says lead study author Carmen Corciulo, Ph.D., a postdoctoral fellow at NYU Langone.

Corciulo says it is too soon to use this experimental model as a therapy in people. Clinical trials must await a test drug that can be safely stored for days if not weeks, and experiments in larger mammals.

Study senior investigator Bruce Cronstein, MD, the Dr. Paul R. Esserman Professor of Medicine at NYU Langone Health, says the team's research is important because the few existing drug therapies for osteoarthritis, such as acetaminophen and COX-2 inhibitor drugs, including naproxen and ibuprofen, only numb joint pain, or like hyaluronic acid, just lubricate its tissues. None stall disease progression or reverse the damage. Painkillers, such as opioids, are often prescribed, but are also highly addictive, he cautions.

"People with osteoarthritis desperately need more treatment options with fewer side effects, and our research advances that effort," says Cronstein, who also serves as the director of the Clinical and Translational Science Institute (CTSI). He noted that other experimental medications are being developed elsewhere, including parathyroid hormone to stimulate bone growth, WNT inhibitor drugs to block the bone and cartilage degradation, and growth factor chemicals to promote cartilage growth.

Cronstein, Corciulo, and NYU Grossman School of Medicine have a patent application pending for the use of adenosine and other agents that help with its binding to chondrocytes, called A2A receptor agonists, for the treatment of osteoarthritis.

Among the study's other key findings was that a cell-signaling pathway, known as transforming growth factor-beta (TGF-beta) and involved in many forms of tissue growth, death and differentiation, was highly active in cartilage tissue damaged by osteoarthritis, as well as in cartilage tissue undergoing repair after being treated with adenosine. Additional testing in lab-grown chondrocytes from people with osteoarthritis showed different chemical profiles of TGF-beta signaling during breakdown than during growth, providing the first evidence that the pathway switched function in the presence of adenosine (from assisting in cartilage breakdown to encouraging its repair.)

Developing treatments to halt or slow the disease is important, Cronstein says, because well over 100 million people worldwide are estimated to have osteoarthritis, which is tied to aging, especially in women. This figure, he says, is only expected to grow as more people live longer and obesity rates climb.

"Right now, the only way to stop osteoarthritis is to have affected joints surgically replaced, which not only comes with pain and risk of infection but is also quite costly," says Cronstein. "If new therapies can delay or prevent disease onset and progression, then fewer joint replacements will save people from a lot of pain and expense." 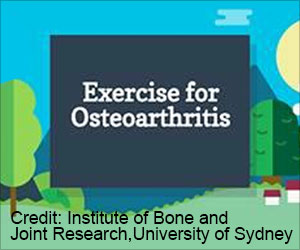 Nine Novel Genes Associated With Osteoarthritis Identified
Nine novel genes for osteoarthritis have been discovered by scientists from the Wellcome Sanger Institute and their collaborators. Results of the study could open the door to new targeted therapies for this debilitating disease in the future.
READ MORE

Opioid Dependence can be Treated With a Failed Osteoarthritis Drug
A drug that failed to treat osteoarthritis can help in reducing opioid tolerance and physical dependence. The drug blocks the neuropathic pathway and decreases the opioid dependence.
READ MORE