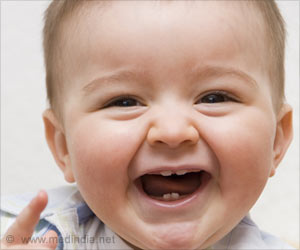 Hearing loss in children affects the child's development. It causes delay in the development of speech and language. A new study has revealed that the repetitive babbles of babies primarily are motivated by the infants' ability to hear themselves.

Study author Mary Fagan, an assistant professor of communication science and disorders in the University of Missouri-Columbia School of Health Professions, said, "Hearing is a critical aspect of infants' motivation to make early sounds. The fact that they attend to and learn from their own behaviors, especially in speech, highlights how infants' own experiences help their language, social and cognitive development."

Hearing loss is a common problem that could occur in childhood or often develops with age or is caused by repeated exposure to loud noises. Keep abreast on its causes and symptoms.
Advertisement

Fagan said, "This research does not diminish the importance of the speech that babies hear from others. We know they need to learn from others, but it raises our awareness that infants are not just passive recipients of what others say to them. They are actively engaged in their own developmental process."

Early identification of hearing loss in infants and young children and treating hearing impairment can go a long way to integrate them into the society of talking people.
Advertisement
Fagan said, "Within a few months of receiving cochlear implants, the number of babies who produced repetitive vocalizations increased, the number of vocalizations that contained repetitive syllables increased, and the number of actual repetitions in the string, such as 'ba-ba-ba-ba-ba,' increased. The research tells us that infants are motivated by hearing the sounds they produce, so these sounds are functional in some way."

Vitamin A Supplementation Reduces the Risk of Hearing Loss

High dose vitamin A supplementation in early childhood was found to reduce the risk of hearing loss from middle ear infection in adolescence and young adulthood.
Advertisement
<< Run for Diabetes Awareness 2015 Campaign to be Held in the...
Hangover Series Fame Ken Jeong Wants to Spread Awareness A... >>