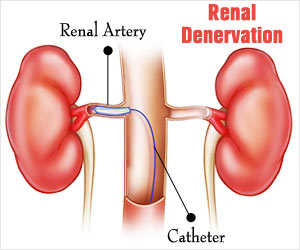 Now, researchers report in the American Journal of Physiology-Regulatory, Integrative and Comparative Physiology that renal denervation-a procedure that disrupts the nerves in the kidneys and prevents them from relaying signals-can treat hypertension, including resistant hypertension, when the nerves are completely blocked. This new study, conducted in rats, identified the specific nerves that had to be blocked to achieve the therapy's blood pressure-lowering effects.

Recurrent atrial fibrillation is reduced when renal denervation is performed with pulmonary vein isolation ablation in patients with AF and hypertension, suggests a research.
Advertisement
‘Renal denervation lowers blood pressure when performed at either the early or late stages of hypertension.’

Most clinical studies have shown that renal denervation can lower high blood pressure in drug-resistant cases, but a number have shown the procedure to be ineffective. Two types of nerves transmit signals between the body and the brain: efferent nerves, which relay signals from the brain to the body, and afferent nerves, which send signals from the body to the brain. Knowing which nerve to block for antihypertensive effects will help optimize the therapy and reduce possible side effects, the study''s authors write.

Reducing blood pressure in patients with resistant hypertension using renal denervation seems to be more successful when it includes accessory renal arteries, suggests a study.
Advertisement
The key implication of this study is that "renal denervation does lower arterial pressure when the denervation is complete," Osborn says. The researchers were able to confirm that the nerves were completely ablated in this study. However, no measurement method to check for complete denervation in patients exists. According to Osborn, this could explain why a recent large-scale clinical trial, Medtronic''s Symplicity HTN-3, failed when the smaller ones before it succeeded. "Although catheter-based renal nerve ablation is now possible, catheter design needs to be improved since present catheters appear only to partially denervate the kidney. Clearly, it is also important to develop a method to assess the completeness of denervation at the time of the procedure."

Interestingly, a previous study by the research group with a different type of hypertensive rat found that that ablating the other nerves, the afferent ones, lowered blood pressure. The opposite findings show how complex hypertension is, Osborne notes.

Analysis of renal denervation trial, SYMPLICITY HTN-3, shows that the results may be affected by the way the procedure was performed and changes in patients' medications and drug adherence.