Remains of 'False Tooth' from the 3rd Century Discovered 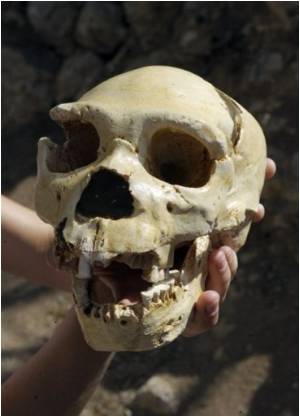 The remains of what seems to be a false tooth has been discovered by a team of archaeologists in Western Europe.

The dental implant comes from the richly-furnished timber burial chamber of an Iron Age woman that was excavated in Le Chene, northern France, the BBC reported.

Making use of sophisticated techniques, a group of archaeologists has virtually recreated a Roman school of gladiators.
Advertisement

The woman, who was between 20 and 30 years old when she died, had an iron pin in place of an upper incisor tooth.


It is possible the pin once held a false tooth made from either wood or bone, which could have rotted away.

The grave was one of four adult female burials in an enclosure dating to the third century BC that were discovered during the construction of a housing development in the Champagne-Ardenne region.

In Egypt a team of archaeologists have unearthed what are believed to be the world's most ancient harbour and a set of hieroglyphic papyri dating to the third millennium B.
Advertisement
The burials, which contained a rich array of grave goods, show all the hallmarks of the Celtic La Tene culture, which flourished across Central and Western Europe at the time.

While the find may be the earliest dental implant known from Western Europe, prosthetic teeth dating back 5,500 years have been found in Egypt and the Near East.

However, most are believed to have been inserted after death to restore the appearance of the deceased.

The researchers cannot completely rule out a post-mortem insertion of the pin in this case either. But they argue that several converging lines of evidence point to its use during life as an implant.

But it remains impossible to say for certain whether the pin once held a replacement tooth made of bone or wood, both of which could have perished in the acidic soil.

The findings have been published in the scholarly journal Antiquity.

Skeletons of victims accused of being vampires, with their heads removed and placed on their legs were found by archaeologists in Poland in the town of Gliwice.
Advertisement
<< Crossing the 50s Could Make You a Burden for Your Boss
Migrating Stem Cells: New Focus for Stroke Treatment >>

Calculate Ideal Weight for Infants Find a Hospital Hearing Loss Calculator Sinopril (2mg) (Lacidipine) Turmeric Powder - Health Benefits, Uses & Side Effects Diaphragmatic Hernia The Essence of Yoga A-Z Drug Brands in India Selfie Addiction Calculator Iron Intake Calculator
This site uses cookies to deliver our services. By using our site, you acknowledge that you have read and understand our Cookie Policy, Privacy Policy, and our Terms of Use