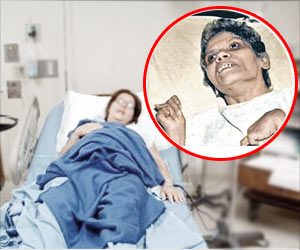 Aruna Shanbaug, the former nurse at KEM hospital in Mumbai, India, who had been in a vegetative state ever since she was raped by a ward boy at the facility on the night of November 27, 1973, passed away on May 18.

A controversy has emerged over performing the last rites of Shanbaug, with two of her relatives staking claim to do so. They claimed before media persons that all attempts to meet Shanbaug were stone-walled by the hospital authorities.

However, nurses at the KEM Hospital demanded that since they had tended to Shanbaug for over four decades, they should be allowed to perform the last rites. The hospital, civic and police authorities have reportedly evolved a compromise by which the nurses and the two relatives shall jointly perform the funeral.


Presently, the hospital has kept her body for public viewing as thousands of people, including nurses, commoners, politicians and others paid homage to Shanbaug.
Advertisement
The last rites shall be performed around 4 p.m. on May 18.

She was aged in her early 60s, deserted by most of her relatives during her lifetime but was looked after with dedication by nurses of Asia's largest public healthcare facility, the BMC-run KEM Hospital where she lay in Ward No. 4A.

Delhi Rape Victim is Now Stable, Doctors
The five-year old girl, who was brutally raped in Delhi, was found to have a 200ml bottle and ......