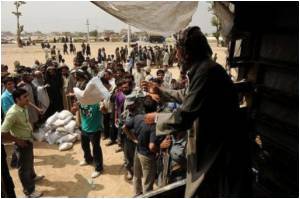 Poverty in India has forced children to face new health risks as they work at recycling hazardous 'e-waste'.

Asif, aged seven, spends his days dismantling electronic equipment in a tiny, dimly-lit unit in east Delhi along with six other boys.


"My work is to pick out these small black boxes," he said, fingers deftly prising out integrated circuits from the pile of computer remains stacked high beside him.


His older brother Salim, 12, is also hard at work instead of being at school. He is extracting tiny transistors and capacitors from wire boards.

The brothers, who decline to reveal how much they earn a day, say they are kept frantically busy as increasing numbers of computers, printers and other electronic goods are discarded by offices and homes.

Few statistics are known about the informal "e-waste" industry, but a United Nations report launched in February described how mountains of hazardous waste from electronic products are growing exponentially in developing countries.

The risks posed to those who handle the cast-offs are clear to T.K. Joshi, head of the Centre for Occupational and Environmental Health at the Maulana Azad Medical College in New Delhi.

He studied 250 people working in the city as recyclers and dismantlers over 12 months to October 2009 and found almost all suffered from breathing problems such as asthma and bronchitis.

"We found dangerously high levels -- 10 to 20 times higher than normal -- of lead, mercury and chromium in blood and urine samples," he told AFP.

"All these have a detrimental effect on the respiratory, urinary and digestive systems, besides crippling immunity and causing cancer."

Toxic metals and poisons enter workers' bloodstreams during the laborious manual extraction process and when equipment is crudely treated to collect tiny quantities of precious metals.

"Workers dip their hands in poisonous chemicals for long hours. They are also exposed to fumes of highly concentrated acid."

Safety gear such as gloves, face masks and ventilation fans are virtually unheard of, and workers -- many of them children -- often have little idea of what they are handling.

"All the workers we surveyed were unaware of the dangers they were exposed to. They were all illiterate and desperate for employment," said Joshi. "Their choice is clear -- either die of hunger or of metal poisoning."

And he warned exposure to e-waste by-products such as cadmium and lead could result in a slow, painful death.

"They can't sleep or walk," he said. "They are wasted by the time they reach 35-40 years of age and incapable of working."

There are no estimates of how many people die in India from e-waste poisoning as ill workers generally drift back to their villages when they can no longer earn a living.

"The irony is that the amounts of gold and platinum they extract are traces -- fractions of a milligramme," said Priti Mahesh, programme coordinator of the New Delhi-based Toxic Link environment group.

"Computers, televisions and mobile phones are most dangerous because they have high levels of lead, mercury and cadmium -- and they have short life-spans so are discarded more," she said.

The Indian government has proposed a law to regulate the e-waste trade, but Delhi environment group the Centre for Science and Environment (CSE) said any legislation would miss the army of informal workers such as brothers Asif and Salim.

"The proposed law says only big firms should be in the business of recycling and dismantling," said Kushal Pal Singh Yadav, a CSE campaigner.

"This is not going to work because the informal sector already has a cheap system of collection, disposal or recycling in place -- so people will use that."

For Joshi, the sight of children working in appalling conditions taking computers apart is as potent a symbol of India's deep troubles as rag-pickers sorting through stinking household rubbish dumps.

"India needs laws which will protect workers' interests, especially the vulnerable and children. We have a lot to learn from Western societies about workers' rights," he said.

Global Environmental Problem may be Worsened by Ban of E-Waste Export
A proposal under debate in the US Congress to ban the export of electronics waste would likely make a growing global environmental problem even worse, a new study has said.
READ MORE