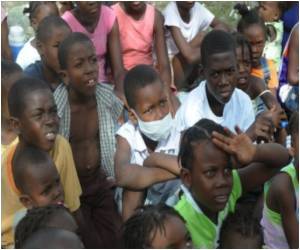 It was just the first reading session and only a handful of kids sat on the wet ground, watching and listening with rapt attention as a woman read aloud to them in the Port-au-Prince neighborhood of Tabarre.

Soon a crowd of 60 formed as curious children carrying baby siblings were joined by adults, eager for diversion from the tedium that, along with the rains, has settled into Haiti's sprawling camps since the January earthquake.

International donors and Haitians are increasingly frustrated at the slow pace of recovery and reconstruction, with millions still homeless.
Advertisement

The scene repeats itself daily in the 15 tent cities where a program called Li Li Li! (Creole for Read Read Read!) works to promote literacy and help kids overcome the inevitable trauma from a catastrophe that left up to 300,000 dead.


The reader, Natacha Micourt, was an artist until the January 12 quake destroyed her studio and left her trapped under the rubble for two days. Now the 32-year-old painter earns 250 dollars a month as a Li Li Li! reader.

They've been forced to swap school books for pistols, homework for hold-ups and drug-dealing: with no parents, some of Haiti's earthquake orphans have turned to slum gangs as ersatz
Advertisement
Micourt acts out stories of magic hats and Clifford, the big red dog, to the delight of the children, allowing them a brief escape from the grim reality of their post-quake existence.

"The kids just love it," she told AFP.

But Li Li Li! is not only about stress release, it is also an attempt to entrench a love for reading in a country where, before the earthquake, 44 percent of the population could not read or write, according to UN estimates.

"Illiteracy will go up even more after the earthquake because so many schools were destroyed," Li Li Li! coordinator Germinal Jocelyn told AFP.

Jocelyn's job is to scout out "unofficial" camps overlooked by Haitian authorities and relief organizations so the reading club can direct its efforts where they are most needed.

"NGOs don't come here, they don't even know these camps exist," she told AFP of the camp in Tabarre.

Li Li Li! is the brainchild of Michelle Karshan, an American and former spokeswoman for the government of ousted Haitian president Jean-Bertrand Aristide.

Karshan launched the initiative with two of her daughters, who also grew up in Haiti, to help them overcome their own shock after the earthquake.

"They felt powerless, but this made them feel like they were doing something," she said.

In the weeks after the quake, Karshan studied the benefits of telling stories to traumatized children, calling on friends to donate colorful books, which were vetted for appropriateness and translated into Creole.

Karshan said one book with drawings of body parts was deliberately omitted as was another which talked about the beautiful things in a child's room. "We can't use that. Nobody's got a room here anymore," she explained.

Karshan admitted the scope of Li Li Li! was limited. The adult readers don't leave the books behind or actually teach the children how to read.

"I specifically didn't want teachers as readers because teachers here are trained to pick on kids, and this has to be about fun and no fear," Karshan told AFP.

While taking on the daunting problem of illiteracy is well beyond the organization's capacity, Karshan hopes the program will serve as a model that at least encourages parents and teachers to read stories to children.

"The most important investment is for Haitian children to learn how to read and write," Karshan added, regretting that due to the enormous problems facing Haiti since the earthquake, literacy had been pushed near the bottom of the priority list for politicians and aid groups.

"The elite doesn't want people to learn how to read," Karshan said. "They're scared of losing their position in society."

Public schools reopened in Haiti in April and temporary classes operate under tents in the larger camps in the country, where more than one in eight, some 1.3 million people, go without a home.

Many children in the smaller, impromptu camps that dot the squalid corners of the flattened capital Port-au-Prince receive no education at all.

Wearing nothing but a Hannah Montana t-shirt, six-year-old Nagostalie Pierre had come to listen to Li Li Li!'s reading.

She proudly wrote her name on a piece of paper as she described how much she enjoys retelling the stories to her younger siblings.

"People don't have the means to send their children to school," said Hippolite Monique, a public school teacher and mother of two, who bumps up her salary by giving private tutoring in the afternoons.

Public school costs between 12 and 60 dollars a year while private school can run up to 300 dollars.

There are over 30 children per class at Monique's primary school and 12 in the "private" sessions she runs from home -- for which she charges 18 dollars a month.

Monique lamented the lack of classes for children in the camps but said there was no money to pay teachers.

"Most kids here don't know how to read and write," she said at the Li Li Li!'s reading session. "And most adults don't either."

After Horror Quake, Haiti's Rum Production Swirls Back to Life

At the fabled Barbancourt rum plant, the sweet waft of production is back in the air after the horror earthquake rocked Haiti four months ago.
Advertisement
Advertisement