Reading from a Tablet Before Bedtime may Affect Sleep Quality 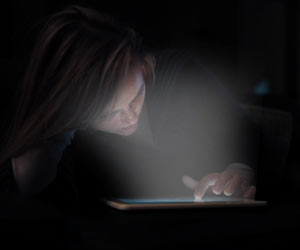 People read from an iPad for 30 minutes before going to sleep felt less sleepy than those who read from standard books and also displayed signs of different electrical activity in the brain when they fell asleep, says a new study.

However, the time taken to fall asleep and time spent sleeping were similar under both conditions.


"Since light has an alerting effect, we predicted a lower sleepiness in the iPad condition at bedtime compared to the book condition," said lead author Janne Gronli of the University of Bergen in Norway. But it was surprising that the iPad light did not delay sleep initiation, she said.


‘The blue light emitted from electronic devices such as iPads may result in poor sleep quality.’


"We found a delay of 30 minutes in the generation of the restorative slow waves during sleep in the iPad condition," Ms. Gronli said.

The study included 16 participants between the ages of 22 to 33 who were familiar with tablets and had no sleep, medical or psychiatric disorders.

An electroencephalogram (EEG) was used to measure brain electrical activity. The participants total sleep time, sleep quality, 1st period of REM (rapid eye movement) sleep. A light meter was used to measure illumination at eye level while the participants were reading in each condition. Illumination was twice high from the iPad compared to a book. The researchers noted that iPad emitted a high level of blue light.

The bedtime and the time at which people got up from the bed were similar in both conditions. The participants slept slightly less than 8 hours on both days. But the participants reported that they felt sleepier when reading the physical book.

The EEG readings of the participants after reading from an iPad showed delayed and reduced slow wave activity, representing deep sleep compared to reading from a book.

"The eye absorbs short wavelength blue light and signals to the brain that it is daytime by triggering waking and alerting active brain areas," said Gronli.

"Slow wave sleep EEG activity is important for the restorative effect of our sleep. The brain's ability to synchronize cortical activity and generate slow waves with high amplitude when we sleep improves memory and cognitive performance," she said.

"We only examined one night using an iPad," Gronli said. "It is tempting to speculate that daily use of an iPad, and other blue light emitting electronic devices before bedtime may have consequences for human sleep and cognitive performance."

"To avoid increased activation before bedtime the bedroom should be used to sleep in, not for work or being on social media," she said.

The study published in the journal Sleep Medicine.

United States is a Sleep Deprived Nation: Centers for Disease Control and Prevention
White people are most likely to get enough of sleep as about 67% of Hispanics have a healthy sleep duration when compared to 54% of African-Americans.
READ MORE

Sleep Deprived Brit Teen Girls Struggle to Stay Alert in School
Nearly half of teenage girls in Britain struggle to stay attentive in school as they do not get enough sleep, reveals a new survey.
READ MORE

Unemployed People are Sleep Deprived
After studying 14,000 households in Britain it was found that unemployed people are 40% more likely to be affected by disturbed or poorer quality of sleep.
READ MORE