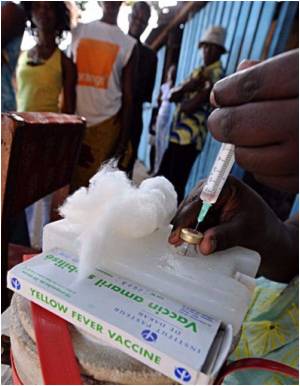 The campaign should begin in about 20 days after the vaccines arrive in Sudan, the World Health Organisation's country representative Anshu Banerjee told AFP.

A regional health adviser to the World Health Organisation (WHO) has warned that India and several other countries in South East Asia face an imminent threat from the dreaded yellow fever virus.
Advertisement

The number of doses available is less than the 3.6 million requested by Sudan's health ministry, meaning priority will go to the most heavily-affected areas in Sudan's far-west region, he said.


"To date, 358 suspected cases of yellow fever have been reported, including 107 deaths," WHO said in a separate news release on Tuesday.

Central Darfur state is worst affected but cases have now been reported in all five states of impoverished Darfur.

A five-week old baby contracted yellow fever virus through breast milk.
Advertisement
Banerjee said this is the first yellow fever outbreak in Darfur in 10 or 20 years. Cases are concentrated in rural areas among the nomad population.

The virus normally circulates among monkeys but could be linked to more mosquitoes breeding this year after heavy rains and flooding in Darfur. Mosquitoes can become infected from the primates and transfer the virus to human beings, Banerjee said.

There is no specific treatment for the illness found in tropical regions of Africa but it can be contained through the use of bed nets, insect repellents and long clothing.

Vaccination is the most important preventative measure.

Banerjee said the Darfur outbreak so far appears comparable to one from 2005 in Sudan's South Kordofan state. At that time, yellow fever caused 163 deaths out of 604 cases over about five months.

In January 2011, 35 people died of yellow fever in the Ivory Coast, the WHO said.

Ethnic minority rebels in Darfur rose up against the Arab-dominated Khartoum government in 2003.

Violence has eased from its peak but overlapping conflicts persists including rebel-government clashes, inter-Arab and tribal fighting, as well as carjackings and other banditry.

An estimated 1.7 million Darfur people are still living in camps for the displaced, the UN says.

Uganda on Wednesday said that a previously unidentified mysterious disease that has killed 48 people in the northern part of the country is yellow fever.
Advertisement
<< Pepsi Launches New Diet Soda in Japan
In Quest of Building Server Made Entirely from Biodegradabl... >>

Zika Fever
News Archive
News Resource
Advertisement
News Category
Milestone In Voluntary Blood Donation Achieved Samsung Reinvents Toilet for the Poor Which is a Better Form of Exercise: Daily or Weekly? First Phase of Foot-and-Mouth Disease Vaccination Shocking News: Polio Cases Return After a Decade in the US
More News
Sign up for Wellness Consult a Doctor Sign up for Selfcare