Rare Twins With One Body and Two Faces Born in Sydney 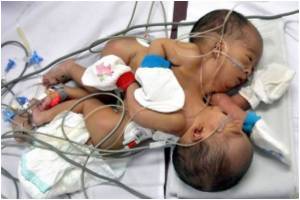 The birth of conjoined twins that have separate brains and identical faces but a single body has been welcomed by an Australian couple and are called little Aussie fighters.

Sydney couple Renee Young and Simon Howie learned at a 19-week ultrasound that their babies would be born with a rare condition called diprosopus, Woman's Day magazine reported.

A Chinese woman had twin girls at the age of 60 following IVF treatment after her only child died, making her possibly the oldest person in the country to give birth, reports state media.
Advertisement

"Even though there is only one body, we call them our twins," Howie told the magazine.

Named Hope and Faith, the girls share one unusually-shaped skull with duplicated facial features and separate brains. They have one set of limbs and organs.

Mom of Conjoined Twins Yet to See Her Babies

A 28-year old mother of three-day old conjoined twins is yet to see her babies.
Advertisement
They are in intensive care at the Westmead Children's Hospital in Sydney's west where they have impressed doctors with their progress.

"They are breathing perfectly on their own and feeding," Howie said, adding that they had their first bath on Sunday night.

"They are little Aussie fighters."

Woman's Day said the girls were conjoined in an extremely rare way and the implications of their condition was not fully clear, but they were being monitored closely in hospital.

"We have no idea how long they will be in hospital," said Howie, who has seven other children with Young.

"We just want to bring them home, happy and healthy to make our family a little bit bigger and a bit more chaotic."

Woman's Day said there had only been 35 cases in which babies with diprosopus -- meaning two faces -- were born joined in a similar way as the girls. None survived.

A pair of formerly conjoined twins were healthy and happy after they were successfully separated in a marathon operation in India, doctors have announced.
Advertisement
<< Zapping the Brain Could Help Tackle Scary Dreams
New MERS Death Reported in Jordan >>