Rare Orange Diamond to be Auctioned in Geneva 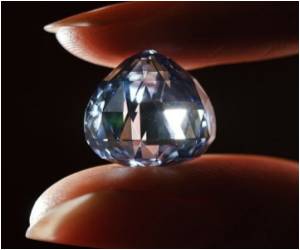 A beautiful and extremely rare orange diamond to be auctioned in Geneva and auctioneers believe it could fetch at least $20 million.

The fiery almond-shaped diamond, nicknamed "The Orange" has been travelling the world in recent weeks to help Christie's evaluate how much of a buzz it might cause.

"There's been a lot of interest, as one could imagine with something so rare," Christie's international jewellery director David Warren told AFP.


The deep orange gemstone, which was found in South Africa, weighs a whopping 14.82 carats, and the Gemological Institute of America (GIA) has handed it the top rating for coloured diamonds: "fancy vivid".
Advertisement
Pure orange diamonds, also known as "fire diamonds", are exceptionally uncommon and very few have been auctioned, with the largest never more than six carats.

"To have one that's over 14 carats is exceptional," Warren said, pointing out that "The Orange" "is in fact the largest recorded vivid orange diamond in the world."

Rare and expensive 'freaks of nature'

Coloured diamonds, once considered a curiosity, are rarer than white diamonds and today rake in higher prices per carat than even the most flawless, translucent stone.

That, Warren explained, was because, "coloured diamonds are real freaks of nature. They begin as white diamonds, and it's some accidental colouring agent in the ground that will turn it a particular colour."

Pink diamonds meanwhile get their colour from a distortion in the crystal lattice as the stone is taking shape.

Christie's rival is set to auction off a flawless 59.60-carat vivid pink diamond, called "The Pink Star", in Geneva on Wednesday, with an asking price of $60 million.

Like "The Orange", the flawless plum-sized shimmering "Pink Star" has received the highest possible colour rating from GIA, as well as top marks for clarity.

It is also the largest of its kind, Bennett said, insisting the anonymous seller was not asking too much.

"Very, very few of these stones have ever appeared at auction and three years ago, a five carat vivid pink made over $10 million. So the estimate on this stone of $60 million would appear to be very reasonable," he told AFP.

It's the accidental colouring of the stones that makes them so hard to come by.

"And the stronger the colour is, the rarer the diamond becomes (and) when you have large sizes, they are also extremely rare," Warren pointed out.

When it comes to vivid orange diamonds, the GIA has only recorded a few such stones over three or four carats, he said, explaining Christie's estimate that "The Orange" will rake in $17-20 million (14-16 million euros).

"I hope at least it will make $20 million, but as it's a one-off, the only vivid orange diamond of its size in the world, who knows what it might make" he said.

For those who can't cough up that kind of money, both Christie's and Sotheby's "Magnificent Jewels" auctions will also offer a range of other items of historic importance but with lighter price-tags.

There is for instance a seven strand pearl necklace, sold by "a royal family" at an asking price of $4.5 million.

Or the shimmering emerald and diamond necklace by Cartier that has been in the collection of Bolivian tycoon Simon Itturi Patino since he bought it for his wife in 1938.

That piece is expected to rake in $7.0-10 million Tuesday evening.

FDA Approves Diamondback 360 Coronary Orbital Atherectomy System
Cardiovascular Systems revealed that it has received a PMA approval from the USFDA for its ......