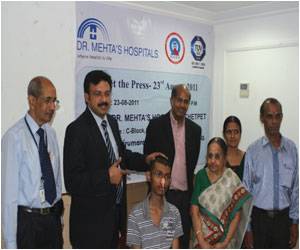 A rare surgery was successfully performed on a 15-year-old in Chennai, South India to correct a huge aneurysm in his brain.

The teenager who complained of severe and continuous head-aches for more than 2 months was brought to Dr. K. P. Thirumaran at Dr. Mehta's Hospital. The patient was found to have a huge aneurysm (swelling of the blood vessel) in the brain that occupied almost 1/3rd of the cerebellum.  The aneurysm was compressing the portion of the brain which controls respiration, heart and all parts of the body below the neck.

The teenager was admitted to the hospital for observation on August 3, 2011, and a day after, Dr. K. P. Thirumaran successfully performed a 4-hour long surgery to correct the aneurysm. Dr. K. P. Thirumaran said, "The surgery proved a great challenge at each instance, the age of the patient, the huge size of the aneurysm, the possibility of rupture of the aneurysm, and on top of all that was the question whether the patient could live a normal life after the surgery.  But, it was indeed a great relief to see that the teenager was able to speak after the surgery."


An intracranial aneurysm is an abnormal outward bulging of an artery in the brain. Aneurysms are often discovered when they rupture causing bleeding into the brain.  The main goal of treatment once an aneurysm has ruptured is to stop the bleeding and potential permanent damage to the brain and prevent recurrence.