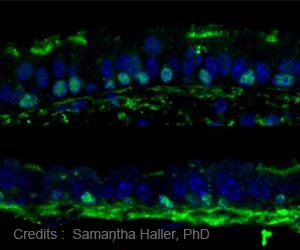 TOR-inhibitor rapamycin aids in preventing age-related loss of stem cells or can even reverse stem cell loss in tracheae and muscle, reveals a new study published in Cell Stem Cell.

Adult stem cells replenish dying cells and regenerate damaged tissues throughout our lifetime. We lose many of those stem cells, along with their regenerative capacity, as we age.

Advertisement
‘Decline in the number of adult stem cells can be reversed with TOR-inhibitor rapamycin.’

Working in flies and mice, researchers at the Buck Institute and elsewhere discovered that TOR, a nutrient sensing pathway which is central to the aging process, drives the loss of adult stem cells.


In most of our tissues, adult stem cells hang out in a quiet state - ready to be activated in case of infection or injury. In response to such injury, however, stem cells have to be able to rapidly divide, to generate daughter cells that differentiate into cells that repair the tissue. This division has to be "asymmetric", meaning that only one of the two cells generated during the stem cell division goes on to differentiate, while the other cell remains a stem cell.
Advertisement
Buck professor and senior author Heinrich Jasper, PhD, says previous research showed that TOR needs to be maintained at a low level in order to preserve stem cells in a quiet state and prevent their differentiation. But in this study, researchers discovered that TOR signaling becomes activated in many stem cell types when they are engaged in a regenerative response.

Jasper, who is now a staff scientist at Genentech, says this activation is important for rapid tissue repair, but at the same time it also increases the probability that stem cells will differentiate, thus losing their stem cell status.

Jasper says this loss - in this case in the fly intestine, mouse muscle and mouse trachea - is particularly prevalent when the tissue is under heavy or chronic pressure to regenerate, which occurs in response to infections or other trauma to the tissue. During aging, Jasper says that repeated or chronic activation of TOR signaling contributes to the gradual loss of stem cells.

Accordingly, by performing genetic or pharmacological interventions to limit TOR activity chronically, the researchers were able to prevent or reverse stem cell loss in tracheae and muscle of aging mice.

"It's all about maintaining a balance between stem cell renewal and differentiation," said Jasper. "It's easy to see how a loss of adult stem cells might accrue over a lifetime and accelerate with aging. We are excited to have a means of rescuing stem cells, boosting their ability to maintain healthy tissue."

The work at the Buck Institute, led by postdoctoral fellow Samantha Haller, PhD, began in the intestines of fruit flies and moved to mouse trachea - tissues that share many similarities. Experiments involving mouse muscle were done at Stanford University.

At the Buck Institute, mice were put on differing regimens of rapamycin treatment starting at different stages of life. Jasper says rapamycin was able to rescue stem cells even when given to mice starting at 15 months of age - the human equivalent of 50 years of age.

"In every case we saw a decline in the number of stem cells, and rapamycin would bring it back." Whether this recovery of tissue stem cell numbers is due to a replenishment of the stem cell pool from more differentiated cells, or due to an increase in "asymmetric" stem cell divisions that allow one stem cell to generate two new ones, remains to be answered, he said.

Jasper says TOR can be regulated by a number of stimuli, and researchers are now attempting to better understand how the activity of this signaling pathway is controlled in stem cells.

"Is there a chronic increase in TOR over a lifetime, or is activation stronger in aging animals? What happens downstream of TOR?" Jasper says researchers at the Buck are also testing homologues of rapamycin that are more specifically aimed at TOR Complex 1, a key complex containing TOR that regulates cell growth and metabolism in all complex organisms.

Source: Eurekalert
Advertisement
<< Progression Towards Multiple Myeloma Identified
Prognosis of Myelofibrosis can Now be Predicted by a Genetic... >>

Vocal Training of Older Rats may Reduce Age Related Voice Problems: Research
Vocal training of older rats reduces some of the voice problems related to their aging, such as the ...

CRISPR-Cas9 System to Treat Age Related Macular Degeneration
The CRISPR-Cas9 system has been found to modify a vital gene that restores vision loss due to age .....