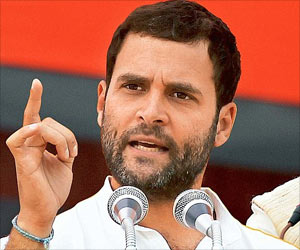 "I have come here to add a little power of mine to yours," he told striking workers at a meeting at the East Delhi Municipal Corporation headquarters in Patparganj.
Advertisement

The Congress leader asserted that the striking safai karmcharis (sanitation workers) would have to show their power and strength to get their demands (for salaries) met by the central and Delhi governments.


Rahul Gandhi accused the central and Delhi governments of "not showing concern for the welfare of the sanitation workers".

On June 9, the Arvind Kejriwal government in Delhi released Rs.500 crore to clear the salary arrears of municipal corporation employees.

Sanitation workers from East and North municipal corporations have been on strike to protest the non-payment of salaries.

6 in 10 People Lack Sanitation Facilities
According to the American Chemical Society, the number of people lacking access to proper ......