Radiation To Enhance Delivery of Nanoparticles to Brain Tumors 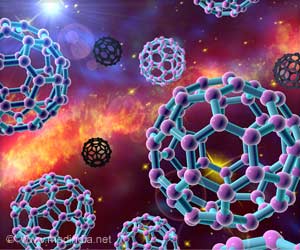 Low dose radiation therapy could increase the delivery of therapeutic nanoparticles used for glioblastomas, improving the possibility of utilizing both growth-factor-targeted and immune-system-based therapies against brain tumors, according to Massachusetts General Hospital (MGH) investigators.

Brain tumors are the abnormal growth of brain cells that may be benign or metastatic. Brain tumors account for about 2.4% of all the tumor diagnosesandare most challenging due to their critically delicate location.
Advertisement
‘Radiation and iRGD-guided nanoparticle carrying the EGFR/PD-L1-targeting siRNAs found to have greatest benefit, increasing survival rate in dangerous brain tumors.’
Read More..
Tweet it Now


"We found that radiation therapy primes brain tumors for enhanced uptake of nanotherapeutics, allowing us to develop a targeted nanoparticle to deliver siRNAs for both immune checkpoint and targeted therapy against the most aggressive type of brain tumor," says Bakhos Tannous, PhD, of the Neuro-Oncology Division in the MGH Department of Neurology, senior author of the report published in ACS Nano. "A brief burst of radiation was able to increase uptake of the nanoparticle up to five-fold, enhancing the effects of targeted therapy, activating the immune response at the tumor site and prolonging survival."


While up to 60 percent of glioblastomas express the EGFR growth factor, a molecule used in targeted therapies against several types of cancer, EGFR-targeted therapies have had little success against the brain tumors.
Advertisement
Similarly immunotherapies directed against immune checkpoints such as CTLA-4 and PD-L1 have promising results against many cancers but not yet against glioblastoma. Some studies have suggested an association between EGFR activation and increased PD-L1 expression, raising the possibility that targeted both could increase the antitumor effects.

In order to deliver siRNAs targeting both EGFR and PD-L1 to brain tumors, the researchers developed a solid lipid nanoparticle guided by a tumor-targeting peptide called iRGD, which binds to a molecule present on blood vessels lining the tumor, allowing it to penetrate both the blood-brain and blood-tumor barriers.

Factors such as the small size and positive charge of this nanoparticle allow it to penetrate the blood-brain barrier; and like other solid lipid nanoparticles, its low cost, stability, biodegradability and ease of manufacture make it an attractive option, explains Gulsah Erel-Akba, PhD, of MGH Neuro-Oncology and Izmir Katip Celebi University in Turkey, the first author of the study.

In order to test whether pretreatment with low-dose radiation therapy would increase the therapeutic effectiveness of the nanoparticle, the investigators compared the results of four strategies in glioma-bearing mice.

Treatment with either radiation alone or with a nanoparticle containing a 'scrambled' siRNA molecule had no effect on either tumor growth or survival of the mice.

An associate professor of Neurology at Harvard Medical School, Tannous explains that radiation is known to counteract the immunosuppressive glioblastoma microenvironment in several ways, suggesting a dual action of both increasing nanoparticle delivery and enhancing the antitumor immune response. While aspects such as the optimum dose and timing of radiation pretreatment have yet to be determined, he notes, the same approach could be used to treat other aggressive tumors with siRNAs targeting different molecular pathways.