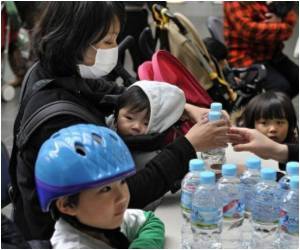 The levels of radioactive elements in tap water at Tokyo water purification plants have been detected to be safe for infants' consumption.

The levels continued to drop after samples were detected to be within the normal range for consumption on Saturday.

Thirty-four becquerels of radioactive iodine have been detected in per kilogram of sample water this morning at the Kanamachi facility in the capital's Katsushika Ward and 48 becquerels at the Asaka plant in Asaka, Saitama Prefecture, near Tokyo. No radioactive iodine has been detected at the Ozaku purification plant in Hamura in the suburbs of Tokyo, the Kyodo news agency reports.

Japan radiation scare spreads to tap water. Parents in Japan are really frightened by the tap water scare and are opting for bottled water from Tokyo's Bunkyo ward.
Advertisement
On Tuesday, 210 becquerels of radioactive iodine was detected at the Kanamachi plant, leading the government to issue an advisory for people in Tokyo's 23 wards and five of its suburban cities-Musashino, Mitaka, Machida, Tama and Inagi on Wednesday that infants should not be provided with tap water.

The metropolitan government, however, lifted the advisory on Thursday following a decline in radioactivity levels to 79 becquerels.

Tap Water in US Contains Large Amounts of Cancer-causing Chemical

Drink Tap Water to Save Your Teeth: Study

Water Matters: Why You Need to Drink Enough Water Everyday
News Archive
News Resource
News Category
Milestone In Voluntary Blood Donation Achieved Samsung Reinvents Toilet for the Poor Which is a Better Form of Exercise: Daily or Weekly? First Phase of Foot-and-Mouth Disease Vaccination Shocking News: Polio Cases Return After a Decade in the US
More News
Sign up for Wellness Consult a Doctor Sign up for Selfcare