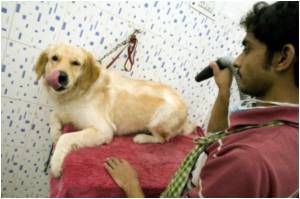 A new rabies treatment developed by MassBiologics at the University of Massachusetts and the Serum Institute of India has achieved successful results in a Phase 1 trial.

The recently completed study of the new rabies therapy has shown that a new monoclonal antibody (RAB-1) resulted in protective antibody levels in the serum of treated subjects equal to the current standard of treatment, which is often not available in the areas of the world hit hardest by rabies.

"We are very encouraged by the results from this trial," said Donna Ambrosino of MassBiologics.


Subhash Kapre of the Serum Institute of India, agreed saying, "The next step for clinical studies is already in the planning, and we are hopeful that this new therapy will have a major impact on rabies across the globe in the not too distant future."
Advertisement
While the vaccine is often available, the preferred human rabies immune globulin (HRIG), which is derived from human blood, is expensive material and typically not available in developing countries.

As an alternative to HRIG, equine immune globulin derived from horse serum is used in many parts of the world, but it is also scarce, expensive and can carry significant side effects.

To address the supply problems and side-effect issues, MassBiologics and the Serum of Institute of India launched an effort to develop a monoclonal antibody (MAB) that could be used in place of HRIG.

Pre-clinical testing of RAB-1 showed that it neutralized all isolates available from a panel of rabies viruses.n the Phase 1 trial run at the KEM hospital, 74 healthy volunteers were randomized into several groups that either received escalating doses of RAB-1 or of HRIG combined with vaccine.

The RAB-1 was well tolerated by all subjects, with no serious adverse side-effects caused by the MAB.

Blood samples were then analyzed and showed the volunteers who received RAB-1 and vaccine at a dose of 0.150 mg/kg had levels of rabies antibodies equal to or higher than the levels from those volunteers who had received the standard does of HRIG and vaccine.

The details were announced at the American Society for Microbiology's 50th annual Interscience Conference on Antimicrobial Agents and Chemotherapy (ICAAC) meeting in Boston, Massachusetts.

Animal bites are common in humans. Bites caused by domestic pets are not fatal unless they become ...