Quitting Smoking Is A Tougher Job For Poorer People 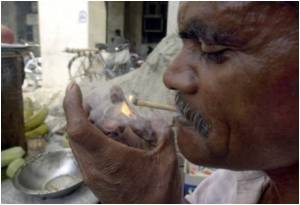 People belonging to lower socioeconomic status (SES) find it tough to quit smoking than their counterparts, who have greater financial and social status, reveals a new study.

Inherited or genetic differences in nicotine clearance rates are associated with cessation rates. Most people want their general practitioners to inform them and would undergo genetic tests by them.
Advertisement

Whether rich or poor, participants managed to quit at about the same rate upon completing a program of cognitive behavioral therapy, either with or without nicotine patches. But as time went on, a disparity between the groups appeared and widened.


Those with the fewest social and financial resources had the hardest time staving off cravings over the long run.

"The poorer they are, the worse it gets," said Professor Sheffer, who directed the program and was an assistant professor with the University of Arkansas for Medical Sciences at the time.

With the repercussions of tobacco smoke looming large, and the promise of a healthy future sans tobacco, it is no surprise that there are teeming numbers who wish to quit the potentially lethal vice.
Advertisement
She found that smokers on the lowest rungs of the socioeconomic ladder were 55 percent more likely than those at the upper end to start smoking again three months after treatment.

By six months post-quitting, the probability of their going back to cigarettes jumped to two-and-a-half times that of the more affluent smokers.

In their study, Professor Sheffer and her colleagues noted that overall, Americans with household incomes of 15,000 dollars or less smoke at nearly three times the rate of those with incomes of 50,000 dollars or greater.

The study will be published in American Journal of Public Health.

Tired of people asking you to stop smoking around them? Don't want to be ordered around by public smoking bans? Simple steps that help you to quit smoking.
Advertisement
<< Third Smallest Premature Baby Discharged From Hospital
Legendary Singer Etta James Dies Of Leukemia >>

Smoking And Tobacco
News Archive
News Resource
News Category
Milestone In Voluntary Blood Donation Achieved Samsung Reinvents Toilet for the Poor Which is a Better Form of Exercise: Daily or Weekly? First Phase of Foot-and-Mouth Disease Vaccination Shocking News: Polio Cases Return After a Decade in the US
More News
Sign up for Wellness Consult a Doctor Sign up for Selfcare