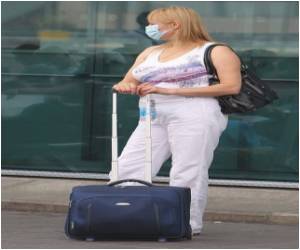 The smog that has descended on Moscow risks causing serious damage to public health, experts say, warning that the only worthwhile precaution is to quit the Russian capital in search of better air.

The wildfires burning around Moscow have created a cloud of smog over the city which at the weekend contained levels of carbon monoxide an alarming 6.6 percent times higher than the acceptable norm. 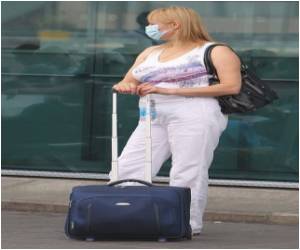 A passenger wearing protective face mask waits to board a plane 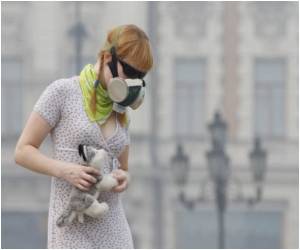 A girl wears a gas mask in Moscow

According to state pollution watchdog Mosekomonitoring, the figure had moderated to just over double acceptable levels on Monday but many Muscovites were choosing to protect themselves with industrial-standard safety masks.


It said that the smoke was made up of particles of carbon monoxide and other toxic agents like nitric oxide and ammonia. Meanwhile, the proportion of oxygen in the air was reduced.
Advertisement
Meanwhile, the overall density of toxic particles less than 10 microns in diameter (PM10s) was also alarmingly highter than the safety threshold of 0.05 miligrammes per cubic metre set by the European Union.

On Monday, the density of PM10s in the Moscow air was six times higher than the recommended European level while on Saturday it was an extraordinary 18 times highter, Mosekomonitoring said.

Pavel Loginov, a doctor at the European Medical Centre in the Russian capital, said the smog could aggravate a long list of conditions, including bronchitis, asthma, allergies, lung and eye infections.

Meanwhile, the lack of oxygen in the air could lead to cardio-vascular problems, he added.

"The only thing that can really help -- is to leave Moscow," he told AFP.

This applied especially to the population at most risk: "the chronically ill, the aged, children and pregnant women," he added.

"Those surgical masks can help a little against the irritations caused by the smog but they do not solve the problem of a lack of oxygen in the air," he added. "They do not help you breathe more easily."

Thousands of Muscovites have already hurriedly followed his advice, with over 100,000 people flying out of the Russian capital on Sunday alone, aviation officials said.

Travel agents reported package tours to destinations popular with Russians like Egypt, Montenegro and Turkey were completely sold out at the weekend while the number of tickets bought online has surged by 20 percent.

The better off of those unable to leave have also been booking themselves into the city's notoriously expensive upscale hotels to take advantage of quality air conditioning.

Alexei Yablokov, a former official on ecological questions on the Russian security council and a founder of Greenpeace in the Soviet Union, described the health consequences of the heatwave in Russia as "terrible".

"According to my calculations in Russia's central district we have 1,000 more deaths than in normal times and this must mean that the numbers of people getting ill is 100-1,000 times higher than usual."

"But the Russian health services and doctors will do everything not to reply to these questions," he told AFP.

The head of the city's health department, Andrei Seltsovsky, said Monday the daily mortality rate in Moscow had doubled and morgues were filled almost to capacity.

But he was rapidly slapped down by the Russian health ministry, which demanded an explanation over his comments.

"Health Minister Tatyana Golikova has asked the director of the health department of the city of Moscow for an explanation over the statistics given at a briefing in Moscow," it said in a statement on Russian news agencies.

Study Says Smog Bad for Your Heart
The first direct indication that smog is bad for heart has been provided by an early test on rats...

Smog Raises Risk of Dying from Lung Disease: Study
In a study which could impact air quality regulation, researchers said Wednesday that chronic ......

Methane Emissions Reduced by Thick Smog in China
A new research has suggested that the fallout from Chinese industrial pollution could actually be .....