Relief of pain from vertebral compression fractures, as well as improvement in pain-related dysfunction, were similar in patients treated with vertebroplasty and those treated with simulated vertebroplasty without cement injections, says a Mayo Clinic study.

The article, "A Randomized Controlled Trial of Vertebroplasty for Osteoporotic Spine Fractures," was released today in the New England Journal of Medicine.


Vertebroplasty is a widely applied procedure in which medical cement is injected into the spine to relieve pain and improve function in patients who have osteoporotic fractures. This study, funded by the National Institutes of Health, was the first of its kind, using a double-blinded research model to examine the impact of vertebroplasty.


"Though the medical community has been using vertebroplasty for many years, there were no research results to prove whether the efficacy of the treatment relates to the cement injections, patient expectations, or other factors," says the study's leader, David Kallmes, M.D., a Mayo Clinic physician who specializes in radiology and neurosurgery. "The cement is a permanent medical implant, and there is some concern that it places patients at future risk for additional spinal fractures."

Researchers from eight medical centers in the United States, United Kingdom and Australia enrolled a total of 131 patients in the trial. The baseline characteristics of pain and function were similar in the vertebroplasty group containing 68 patients and the control group containing 63 patients. Within days of treatment, both groups showed similar improvements in function and pain. Researchers continue to follow study participants, and one year results will be released at a later date.

"We aren't saying the vertebroplasty doesn't work, because it somehow does," says Dr. Kallmes. "But both sets of patients experienced significant improvements in pain and function a month following the procedure, whether they received cement injections or not. Improvements may be the result of local anesthesia, sedation, patient expectations, or other factors."

"Patients should seek medical advice from their care provider before making a decision about treatment options," Dr. Kallmes advises.

Dr. Kallmes says that several related research projects are in progress at Mayo Clinic, including a study of kyphoplasty, which uses a balloon to make space for cement injections, as well as an unblinded trial to measure the impact of local anesthesia on pain. 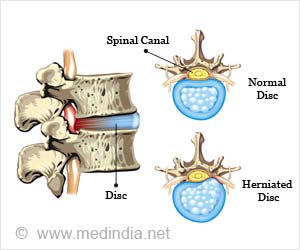 Herniated Disc
Herniated disc is a condition in which the intervertebral disc protrudes into the spinal canal and compresses the spinal nerves, causing severe pain.
READ MORE