Quarter of Brit Women are Size 18 or Above 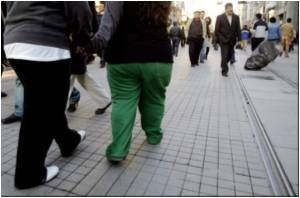 A survey has revealed that a quarter of British women are now wearing a size 18 or above clothes, with demand for XL almost doubling in five years.

The survey showed that more than 6.2million women are now "plus" sizes, and that only 31 percent are size 12, which used to be the average size, which is now a 16.V host Vanessa Feltz, 48, is trying to leave the ranks of the "larger lady", and had a gastric band operation in June.


Half of all adults are overweight or obese, forcing clothes shops to extend their ranges, but half of larger ladies say the bigger sizes are "less fashionable", found analysts Mintel.

"Retailers need to wake up to the growth potential of this market," spokeswoman Tamara Sender said stated.

The practice of holding summer barbeques are being seen as one of the major reasons for the rise of obesity in Britain, a group of health experts warned.
Advertisement

Ageing and unhealthy eating habits seem to be taking its toll on the much celebrated baby boomers.
Advertisement
This site uses cookies to deliver our services.By using our site, you acknowledge that you have read and understand our Cookie Policy, Privacy Policy, and our Terms of Use  Ok, Got it. Close
×