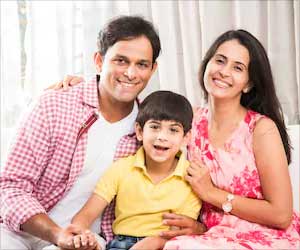 People living in Pune (Punekars) like spending more time with their family than working overtime, reports a survey.

David Lloyd Clubs Talwalkars, a European high quality, family-focused health and leisure membership club which is opening its first club in Asia here in Pune has commissioned a survey that unveils the lifestyle and exercise patterns of Punekars. A total of 500 citizens of Pune were interviewed face to face, over the telephone and through online survey methods and were asked questions regarding their work-life balance, family time and leisure activities.

Advertisement
‘Spending quality time with family is important in todays rapidly changing world, as it helps with emotional bonding, brings them closer and ultimately improves the wellbeing of every member of the family.’
Read More..

The survey reveals that only 33 percent of Punekars are spending their family time the way they would like to due to time constraints as either they are too occupied with work, too tired or just because they don't have many options. Just 53 percent of respondents said that they spend more than an hour with the family every day and parents between the ages of 30-40 were particularly squeezed with only 42 percent of this age category spending quality time each day as a family. 42 percent of Punekars would like to reduce their extra time at work to spend quality time with family, and 23 percent would give up socializing with friends.


When Punekars do have time to spend together as a family 31 percent would prefer to visit new places together, 29 percent just relaxing and spending time at home whilst 24 percent would go out for recreational, sports and entertainment activities. However in reality 61 percent of Punekars spend most of their family time at home, with 39 percent spending their together time in front of the television.
Advertisement
It is good to notice that people in the city of Pune, despite hectic and stressed lifestyle, mostly manage to find time for themselves. 63 percent of respondents said that they have several hours each week for themselves with almost 50 percent of this time spent at home and only 41 percent of respondents able to spend their free time doing what they would like. There are also 19 percent who feel it is difficult for them to find time to relax and do what they love doing at all and 18 percent who only have a few hours each month to themselves.

With regards to sports and exercise patterns, the survey states that 43 percent of respondents said that sports play a very crucial role in their family's day-to-day lives with a further 43 percent who feel that they would like to do more sports and exercise but can't due to various reasons. Given that the majority of respondents felt sports was important it is interesting to note that almost 60 percent exercised together as a family and only 29 percent don't do any sports together.

The survey states that 63 percent respondents are not part of any club for sports or any other leisure activity but 36 percent respondents would like to have access to a health and sports club that offers entertainment options for the entire family. Currently just 17 percent have access to a sports club in their local area, and only 15 percent responded that they have the right activities and facilities near to them. More than half of the respondents said that they could easily spend anything between Rs 2500-5000 for leisure and entertainment whereas the rest of them can spend up to Rs. 15,000 for quality services.

Commenting on the survey, Hazel Geary COO, David Lloyd Clubs Talwalkars India said, "It's wonderful to learn about the lifestyle patterns of the people of Pune through this survey. We understand that one of the biggest challenges of urban living is finding the opportunity to spend time with our loved ones and take time for ourselves. It is really important for families to spend time together doing things that they love which helps with emotional bonding, brings them closer and ultimately affects the wellbeing of every member of the family. Families need to ensure that they carve time out of their busy schedules to spend time together and work on their emotional connection which can otherwise get lost within today's rapidly changing world."

David Lloyd Clubs Talwalkars is intended to fulfill the demand of sports and leisure club facilities and serve as a one-stop destination for families to spend quality time together by involving in activities of their own choice.

People Who Spend Time in Nature More Creative Than Others
A joint study has found that people who spend at least four days in the natural environment ......

Pre-Diwali Cleaning: Best Way to Spend Time with Family
Pre-Diwali Ideas: Home cleaning on Diwali is a great way to spend time with your family....