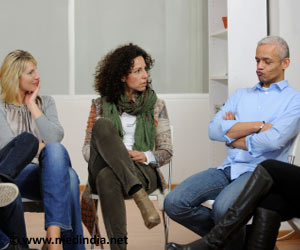 Brief treatments by way of Accelerated Resolution Therapy (ART) largely cut down symptoms linked to post-traumatic stress disorder (PTSD) including, depression, anxiety, sleep dysfunction and other physical and psychological symptoms show researchers at the University of South Florida (USF) College of Nursing. The findings of this first study of ART appear in an on-line article published June 18, 2012 in the Journal Behavioral Sciences.

ART is being studied as an alternative to traditional PTSD treatments that use drugs or lengthy psychotherapy sessions. The talk therapy uses back-and-forth eye movements as the patient fluctuates between talking about a traumatic scene, and using the eye movements to help process that information to integrate the memories from traumatic events. The two major components of ART include minimizing or eliminating physiological response associated traumatic memories, and re-envisioning painful or disturbing experiences with a novel technique known as Voluntary Image Replacement.

For the initial study, USF researchers recruited 80 adult veterans and civilians, ages 21 to 60, in the Tampa Bay area. Before receiving ART, patients were tested for symptoms of PTSD and depression, with the vast majority testing positive, 80 percent for PTSD and 90 percent for depression. After the patients received ART-based psychotherapy, the research team reported a dramatic reversal in symptoms. In as few as one to four sessions, those showing symptoms had decreased to only 17 percent for PTSD and 28 percent for depression. Improvements were also seen in trauma-related growth and self-compassion in just one to four treatments.


"From this initial assessment, ART appears to be a brief, safe, and effective treatment for symptoms of PTSD," the report concludes.

"Early results are very promising," said principal investigator Kevin E. Kip, PhD, professor and executive director of the USF College of Nursing Research Center. "Most people who came in to be treated had very high scores for PTSD, and after treatment, the majority had very large reductions. The treatment also reduced other symptoms, like depression, as well as improved sleep."

David Kinchin, author and expert on PTSD sheds light on the invisible injury that continues to haunt many who have experienced a significant traumatic event.
Advertisement
According to the National Institutes of Health (NIH), PTSD has become an epidemic in the United States. Recent NIH statistics show more than 7.7 million American adults and as many as 31 percent of war veterans suffer from PTSD. They experience mild to extreme symptoms, often with greatly impaired quality of life and physical and psychological functioning.

ART is a particularly promising alternative to traditional PTSD treatments, because it uses no drugs, has no serious adverse effects, and can improve symptoms in -few therapy sessions. The compelling results achieved principally with civilians in the first study prompted the USF College of Nursing to seek and facilitate expansion of a second ongoing ART study funded by the U.S. Army. This expanded study encompasses active duty service members, veterans, and reservists across all branches of service at sites around the country.

"As part of RESTORE LIVES at USF, the innovative nursing research being conducted by Dr. Kip and his team demonstrates our commitment to the health and welfare of our nation's military, veterans and their families," said Dianne Morrison-Beedy, PhD, senior associate vice president of USF Health and dean of the College of Nursing. "We are energized that the Department of Defense has agreed to extend the scope of the current study funded by the U.S. Army. The results that the ART studies have shown so far are truly amazing, and offers new hope to those suffering from PTSD."

"We are happy about our collaboration with USF College of Nursing," said Navy Lt. Cmdr. Raul Rojas, commanding officer for the Naval Operations Support Center (NOSC). "We're honored to be the first West Coast study site for the USF College of Nursing's ART study. "We hope our relationship will help get the word out to those who can benefit from the study."

ART is one of the five sub-studies of the USF College of Nursing's Research to Rehabilitate/Restore the Lives of Veterans, Service Members and their Families (RESTORE LIVES) grant funded and administered by the U.S. Army Medical Research and Materiel Command and the Telemedicine & Advanced Technology Research Center (TATRC) at Fort Detrick, MD.

"All the pieces are coming together, with published results on ART, effectiveness leading to Department of Defense approval to extend the scope of the study, and our first national study site in Las Vegas. It looks like we are closer to getting a more efficient evidence-based treatment into place that will actually eliminate the traumatic response to memories and bring relief to the troops and their families," said co-principal investigator Carrie Elk, PhD, assistant professor and military liaison at the USF College of Nursing.

Depression is a common disorder and many worldwide suffer from depression. Early recognition of symptoms and signs of depression can help in taking a holistic approach to the management of depression.
Advertisement
<< Prevention of Damage To The Retina In Diabetic Eye Diseases ...
Figures Show Divorces on the Rise Again in Iraq >>

The Essence of Yoga Blood Donation - Recipients How to Reduce School Bag Weight - Simple Tips A-Z Drug Brands in India Loram (2 mg) (Lorazepam) Daily Calorie Requirements Drug - Food Interactions Hearing Loss Calculator Accident and Trauma Care Selfie Addiction Calculator
This site uses cookies to deliver our services. By using our site, you acknowledge that you have read and understand our Cookie Policy, Privacy Policy, and our Terms of Use