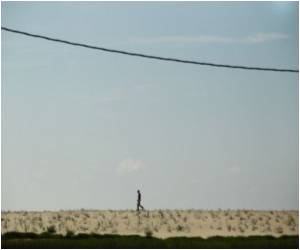 A new study has found that the psychological effects of the BP oil spill, the largest recorded environmental disaster in human history, extend far beyond people living around the areas of the Gulf of Mexico that were directly impacted by the spill.

The researchers reported that even in areas that did not have oil exposure, people still experienced elevated levels of anxiety and depression and reduced ability to show resilience in difficult emotional and financial situations because of the disaster.

Depression has increased by more than 25 per cent among US Gulf coast residents as they worry about their devastated livelihoods and wrecked shorelines caused by the BP oil spill.
Advertisement

"The findings highlight the substantial psychological impact that the oil spill has had on coastal communities in Florida and Alabama," said Dr. J. Glenn Morris, a UF public health expert in the department of medicine and director of the Emerging Pathogens Institute.


"In particular, the impact was not directly related to the amount of oil that reached an area. Instead, it correlated most closely with financial loss resulting from the spill."

A swarm of solar-powered robots may soon be brought in by scientists to clean up Gulf oil-type spills in a record time of 30 days.
Advertisement
The researchers asked the study participants - mostly men involved in the Gulf fishing industries, or people who had suffered direct financial damages because of the spill- to answer a range of psychological questions, from how their financial circumstances were affected by the spill to how well they were able to cope in the months following the disaster. Participants were also assessed on cognitive tests to determine dexterity, speed and attention span.

Among people living in Franklin County, where oil had not reached the shore, participants showed similar levels of anxiety, depression, fatigue, anger and overall mood disturbance as the citizens living in Alabama's directly affected communities, especially if the participant's livelihood depended on fishing or had been directly impacted financially by the spill.

The study has been published in the journal Environmental Health Perspectives.